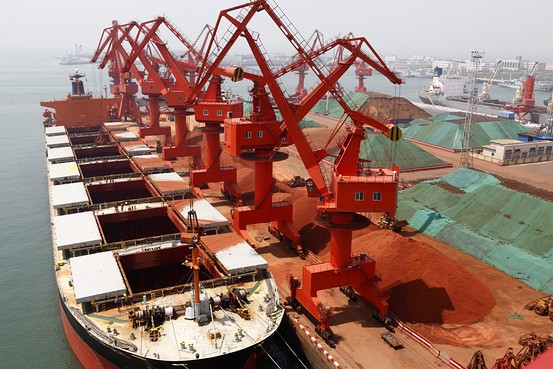 China’s imports of major resources fell in May, though they continued to extend modest on-year gains, signaling that macroeconomic uncertainty and metal-financing probes may have taken the edge off trading appetites.

The data reflect a broader trend of strong exports offset by relatively weaker imports in the world’s second largest economy, which is also in key cases the world’s largest buyer of industrial commodities such as iron ore and copper. Analysts widely expected a step back from near-record levels of commodity purchases posted in April.

Imports of crude oil fell 6.4% from April to 6.37 million barrels a day, though they were up 8.9% from a year ago, data from the General Administration of Customs showed Sunday. Iron ore and copper followed the same tack. Imports of the steelmaking ingredient fell 7.2% from April to 77.4 million metric tons but rose 13% on year. Copper shipments ebbed 15.6% from April but gained 6% from the same month in 2013 to reach 380,000 tons in May.

The government has been closely monitoring the role of copper and iron ore imports for their potential to exacerbate China’s vulnerability to financial instability. An estimated third or more of Chinese metal imports are believed to be used as collateral for loans in China’s vast shadow-banking system, instead of feeding actual demand. Chinese authorities are investigating whether companies used the same copper, aluminum and iron ore held as stock in Qingdao– a relatively small port in China’s Shanghai-centered copper trade–as collateral for multiple loans, people familiar with the matter said. News of the probe lowered Chinese copper prices by 4% last week.

“The on-year decline in imports [calculated by headline import value] is possibly due to the tightening of trade finance policies. The impact of the probe in Qingdao is probably bigger than some had thought and more and more banks are paying more attention to it,” ANZ economist Zhou Hao said.

The government is also stepping up its monitoring of iron ore used for financing purposes, though no actual curbs on imports have so far been put in place. Imports are likely to continue to face pressures in the near future, Mr. Zhou said.

Still, China’s commodity imports generally continue to be robust, showing healthy upward clips from a year earlier. This is likely due to a stabilizing economy and a small raft of economic stimulus the government released earlier this year, encouraging investment in infrastructure and urban-renewal projects.

The on-year rise in crude imports may be the due to the opening of a new refinery in Quanzhou in April, analysts say. China’s demand for crude oil might be supported by demand for gasoline, jet fuel, liquefied petroleum gas and the petrochemical feedstock naphtha, all of which have enjoyed healthy demand this year. However, maintenance at some Chinese refineries may have led to the on-month declines, and refineries might be drawing down stockpiles rather than importing more crude oil, analysts say.

– Liyan Qi contributed to this article.