China’s Yuan as a Rival to the U.S. Dollar? It’s Closer Than You Think – Real Time Economics 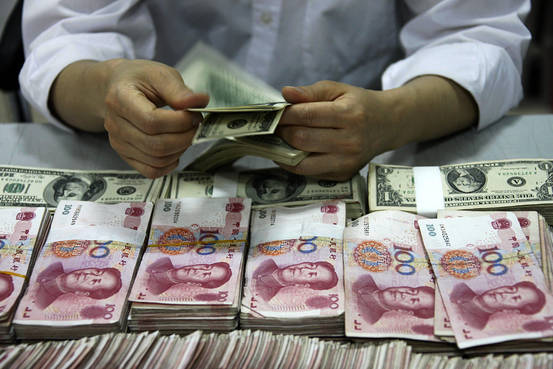 American strategic economic leadership, to an unappreciated extent, rests on the central role the dollar plays in the global financial system, as the latest Capital Account column argues.

Who can challenge that leadership? Neither the yen nor the deutsche mark nor its successor, the euro, has dethroned the dollar. The only contender on the horizon is China’s yuan and most experts think that’s at least decades away. Not only is the yuan not yet freely convertible, there is not yet a deep liquid market of yuan assets for foreigners to buy.

But the yuan could challenge the dollar sooner than the consensus believes, and a new report from Louis-Vincent Gave of Gavekal Dragonomics helps make the case.

Mr. Gave notes that internationalization should be seen as one component of a broader strategy by China to carve out a more central role in the global economic system, including the Asian Infrastructure Investment Bank, the Silk Road infrastructure fund to improve connections within Asia, and the Contingent Reserve Arrangement (a mini-International Monetary Fund).

This year will be remembered as the date China became “deeply serious, and committed, to internationalizing the renminbi and assuming a ‘great power’ status around the world.”

Foreign investors can already buy up to $1 billion worth of Chinese securities, but there isn’t much for them to buy, which hampers the yuan’s internationalization. But once it becomes freely convertible, “then Chinese equities and fixed income will quickly be included in all major benchmarks (whether MSCI All Countries, Barclays global aggregates etc…), thereby forcing all the dumb indexed money … to sell everything else and buy China.” The conventional wisdom is that for foreigners to become big holders of yuan, China has to run a trade deficit. (Then foreigners are left holding yuan earned by selling stuff to China that they don’t need to buy stuff from China.)

But there’s another route. China could instead simply give yuan to other countries to invest in (presumably Chinese-made) equipment and know-how, as the United States’ Marshall Plan gave Europe dollars with which to rebuild. This, says Mr. Gave, is China’s strategy: “For China, financing foreign infrastructure projects, even at relatively low returns, is a more attractive proposition than keeping foreign reserves in low-yielding U.S. or eurozone bonds.”

For China, the key to making the yuan a rival to the dollar is political will: When your currency becomes a reserve currency, you get more influence in the world, and in return the world gets more influence over you. Given China’s global aspirations, that trade-off is going to look steadily more appealing.