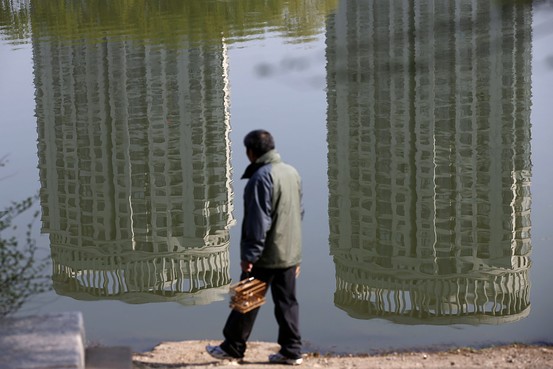 A man walks past the reflection of newly-built residential buildings at a park in Shenyang, Liaoning province.
Reuters

Shh! As the country’s property market starts to deflate, China’s cities may be relaxing their property curbs. But it doesn’t mean they want too many people to know about it.

The latest example comes from the northeast city of Shenyang, where the glare of media attention after it was reported that the government was easing property curbs prompted some real estate types to dive for cover.

Larger Chinese cities like Shenyang are relaxing their property policies, but want to do so quietly. Officials are loath to publicize their efforts to ease curbs for fear it would seem a tacit acknowledgement that the local economy has hit the rocks.

This week, Shenyang—an economic hub and the capital of north China’s Liaoning province—grabbed the spotlight in local news and online, after property consultants and agents said that the city had revoked restrictions on multiple home purchases.

After such news broke, the city scrambled to tamp down such reports. Property agents who had freely talked about the relaxed curbs became more tight-lipped. A spokesman from Shenyang’s propaganda office told China Real Time Thursday that reports that Shenyang had completely scrapped home purchase restrictions were untrue. He said he was not authorized to say if the city has made other adjustments to local property measures.

Lawyers and analysts say Shenyang’s reluctance to acknowledge moves to ease the curbs isn’t likely to stem from fear of offending the central government, which has signaled that it wants local authorities to adjust policies according to the on-the-ground conditions.

Instead, like many local governments, it’s trying to take a cautious approach, analysts said.

Such moves have largely been made both out of a desire to boost the market, as well as preserve social stability.

“People are losing trust in how the authorities have handled the property market. Home prices are falling and it’s their nest egg at stake,” says a Shenyang-based property consultant, who declined to be named. “The local authorities want to loosen the curbs quietly.”

Inflation: The One Bright Spot in China’s Economic Figures