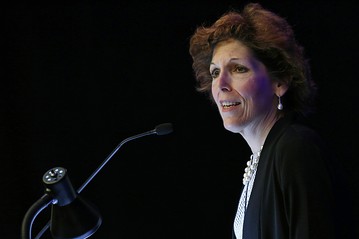 “I don’t think the Fed has become political….We’re going to focus on the economic developments,” Ms. Mester said during an interview on CNBC, a day after Ms. Yellen was grilled by House Republicans who accused her of partisan bias. “We’re going to focus on setting the best monetary policy that we can to further our dual mandate that’s given to us by Congress.”

Some GOP lawmakers on Wednesday questioned Ms. Yellen’s regular meetings with Treasury Secretary Jack Lew, a top Obama administration official. Ms. Mester said it is appropriate for the Fed chair to meet with the Treasury secretary, and that it doesn’t mean Ms. Yellen’s decisions are influenced by politics.

Commenting on Wednesday’s sometimes-contentious hearing, she said, “I wish we were all as poised as Janet Yellen yesterday at that hearing.”

Ms. Mester also spoke against the legislation known as “Audit the Fed,” calling it “misnamed, and it’s also misguided.” The Fed’s financials already are audited, she said, and the proposal would infiltrate political interests into policy making.

The Cleveland Fed chief also said she thinks the Fed’s June policy meeting should be a “viable option” for raising rates, echoing comments she made earlier this month in an interview with The Wall Street Journal.

Ms. Yellen told lawmakers this week that the Fed “will at some point begin considering an increase in the target range for the federal funds rate.” With the labor market continuing to improve, Ms. Yellen said the central bank will raise rates once it is “reasonably confident” that long-sluggish inflation will rise back toward its 2% target.

Earlier on Thursday, San Francisco Fed President John Williams said on Fox Business Network that the Fed’s first interest-rate move “could be sometime this summer or this fall.”