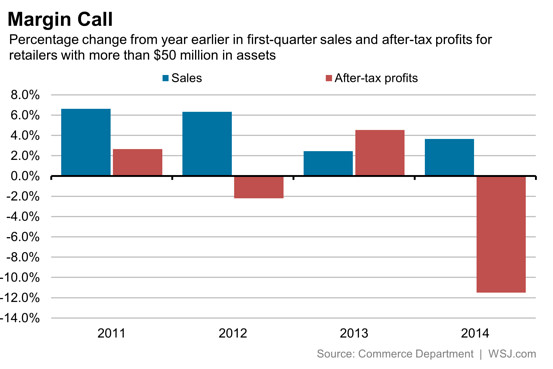 A chilly start to 2014 in much of the country didn’t knock down sales at large retailers—but it shrunk profits.

After-tax profits for U.S. retailers with more than $50 million in assets fell 11.5% in the first quarter, compared with a year earlier, even as sales grew 3.6%, a Commerce Department report said Monday.

Heavy discounting appears to be the culprit for revenue and profits moving in opposite directions. Retailers put products on sale to lure in shoppers otherwise hesitant to venture into the cold to shop, said Sung Sohn, an economist at California State University, Channel Islands.

Unusually cold weather took a toll on consumer demand, especially in December and January. “Retailers ended up with unwanted inventories,” Mr. Sohn said. “The only way to move that is through promotions, and that shaves profit margins.”

In the time when shoppers look for discounts online and compare prices on smartphones, mass-market retailers have little ability to pad prices, especially when demand weakens, Mr. Sohn said.

In the first quarter, large retailers recorded a $14.6 billion after-tax profit on $625.9 billion in sales. The decline in first-quarter profits was the largest since 2009, at the tail end of the recession.

Large retailers have been profitable every quarter since the last three months of 2008.