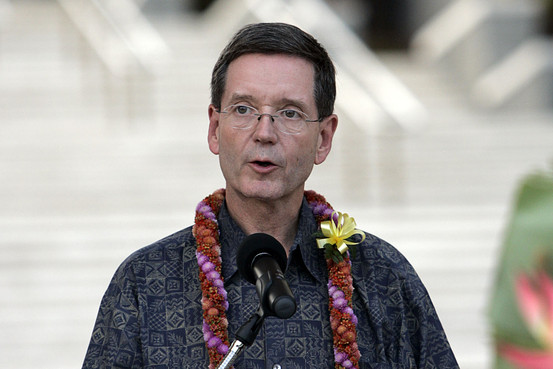 White House nominee Allan Landon, in 2008, when he was Bank of Hawaii chief executive.
ASSOCIATED PRESS

Hundreds of community bankers in town this week will be raising concerns with lawmakers about the stalled nomination of one of their own to fill an open seat on the Federal Reserve’s seven-member board of governors.

Nearly 1,000 small bankers are in town for a policy summit hosted by the Independent Community Bankers of America, a trade group, and will be meeting with members of Congress and regulators to press policy priorities, including the pending nomination of former Bank of Hawaii chief executive Allan Landon to fill one of two empty seats on the Fed board.

Senate Banking Chairman Richard Shelby (R., Ala.), whose panel must consider Mr. Landon’s nomination before it can get a full vote on the Senate floor, said he told the White House a couple of weeks ago he won’t schedule a hearing for Mr. Landon until the president nominates a candidate for the other open seat at the Fed.

“We’ll see if they come up with two, and we’ll see what we can do,” Mr. Shelby said Tuesday. “They’ve got another opening. You know, they’ve never been in a hurry,” he said of the administration’s speed on filling open Fed seats.

The delay does not appear fueled by any GOP objections to Mr. Landon himself. Republicans as well as Democrats had been pushing the White House to embrace a candidate with community banking experience and none has publicly raised any complaints about Mr. Landon’s background.

“As is standard when we have vacant positions, the White House is conducting a comprehensive search for experienced and highly qualified individuals,” a White House spokeswoman said about the other vacant Fed governor slot. “When we are prepared to make an announcement, we will do so.”

ICBA President Camden Fine said at his group’s event Wednesday that Jeff Zients, director of the National Economic Council, told him he is actively vetting candidates.

Mr. Shelby noted that Mr. Obama also has failed to nominate a vice chairman of supervision at the Fed, a new role created by the 2010 Dodd-Frank law to oversee the central bank’s significant regulatory powers. “We’ve asked them about [that vacancy] over and over. They ought to think about that too,” Mr. Shelby said.

ICBA is now pressing the White House to produce another Fed nominee as well as pushing the issue on Capitol Hill.

“From our view, the ball is in the [White House’s] court,” the ICBA’s Mr. Fine said in an email. He said he has reached out to the Obama administration and urged them to fill the other Fed vacancy. “Their response is that they are working on it,” he said, adding that the president would likely need to make an announcement before Memorial Day in order for confirmation hearings to happen before the August recess.

“Confirmation of nominees becomes more complicated after the August recess because more and more attention will be turned to presidential politics by that time,” he said.

Community bankers lobbied for years to get someone who understands their point of view onto the Fed board, and enlisted the help of several members of Congress to press the White House. President Barack Obama’s nomination of Mr. Landon in January was seen as a major victory for small bankers.

—Ryan Tracy contributed to this article.

Who Is Allan Landon?

Naming of Allan Landon to Fed Board Follows Lobbying Push

Landon May Not Be Community Banker Under New Legislation

Obama to Name Allan Landon to Federal Reserve Board of Governors