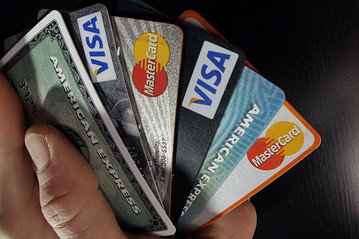 Consumer borrowing accelerated in July as Americans took on more credit-card debt and other loans.

Total outstanding consumer credit, excluding loans secured by real estate like home mortgages, rose at a seasonally adjusted annual rate of 9.7% in July from the prior month to $3.238 trillion, the Federal Reserve said Monday. That was up from growth of 7.1% in June and 7.3% in May, and matched April’s pace.

Consumer spending generates more than two-thirds of U.S. economic output. A surge in spending on durable goods like automobiles boosted economic growth during the second quarter, and stronger consumption in the second half of the year would lead to stronger overall growth.

But July’s jump in credit-card borrowing wasn’t accompanied by a spike in household spending. Sales at retailers and restaurants were flat from June, and overall consumer spending fell 0.1% in July, according to Commerce Department estimates.

Americans have been more cautious since the recession about piling on credit-card debt to finance household spending, with modest growth in outstanding revolving credit earlier this year outside of a spike in credit-card borrowing during April. July’s 7.4% growth rate for revolving credit was the fastest since then, up from 2.5% in June and 3.3% in May.