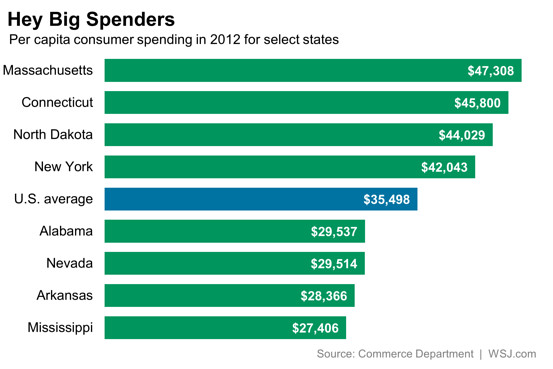 Consumer spending went bust in Nevada like nowhere else in the country.

In the five years leading up to the recession that began in 2007, the Silver State had the largest increase in personal consumption expenditures, rising 61%.

In the following five years, through 2012, no state had a weaker gain than Nevada’s 1%, according to state-level data the Commerce Department released for the first time Thursday.

The data offers some clues as to why the recovery has been uneven across the country. Those three states ranked among the top ten in unemployment in June according to the Labor Department. In the U.S., consumer spending accounts for about two-thirds of the total economy. States with weak gains appear likely to struggle to add jobs and grow their economies.

Mississippi, Michigan and Rhode Island followed Arizona and Nevada with the weakest consumer spending increases from 2008 through 2012. Mississippi and Rhode Island are tied for the highest unemployment rates in the country, while Michigan is fourth, behind Nevada.

Only one state had stronger spending after the recession than before: oil-rich North Dakota. That state also boasts the lowest unemployment rate at 2.7% in June.

The state-specific consumer spending data comes from a new “prototype” report from the Commerce Department. The department will seek input on the numbers it released Thursday and evaluate its process before a planned “official” release sometime next year.

Among the other findings in the report:

See how your state ranked in consumer spending growth: