Contracting GDP Is Rare Outside of Recessions – Real Time Economics 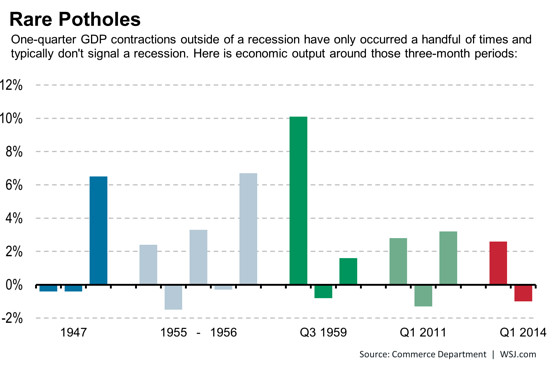 The U.S. economy contracted at a 1% seasonally adjusted annual pace in the first three months of the year, the Commerce Department said Thursday, marking only the second time since the recession that output declined during a quarter.

That doesn’t mean the U.S. is in a new recession, at least according to the economists who make that determination.

“Nobody thinks that there’s any significance to the first quarter being negative,” said Northwestern University economist Robert Gordon, a longtime member of the National Bureau of Economic Research’s business cycle dating committee, which is the nation’s semi-official arbiter of U.S. recessions.

The U.S. economy has only contracted a handful of times since 1947 in any quarter outside of a recession, according to the Commerce Department’s Bureau of Economic Analysis, the agency that tracks GDP figures. Average two consecutive quarters together and there have been no declines when the economy wasn’t in a recession.

Many economists blame an unusually cold weather for the first quarter’s decline, as storms and chilly temperatures kept shoppers indoors, transportation hubs closed and construction sites shuttered. But economic activity since March seems to have picked up. Macroeconomic Advisers before Thursday was forecasting a 3.8% growth rate for the second quarter this year. That would put GDP growth for the first half of 2014 well into positive territory, diminishing any concerns of a recession right now.

Mr. Gordon — who recalls a childhood discussing such matters over the breakfast table with his father, also an economics professor who specialized in business cycles – explained other bouts of one-quarter declines over the last seven decades outside of recessions:

The latest quarter, from January through March, reflected an economy simply plodding along and offering no hope of kicking off a strong year, Mr. Gordon said. “We need solid growth above 3% for the third and fourth quarters to provide convincing evidence that we have broken out of the sluggish pace of the recovery.”

Stanford economist Robert Hall, who chairs the NBER committee, put the first quarter’s decline this way: “There’s a fair amount of randomness in GDP growth. Weather is a factor that I believe will be important for Q1 this year.”

“The probability of going negative,” he said, “is much higher when the economy is growing slowly and the growth rate is close to zero even before the hiccup.”