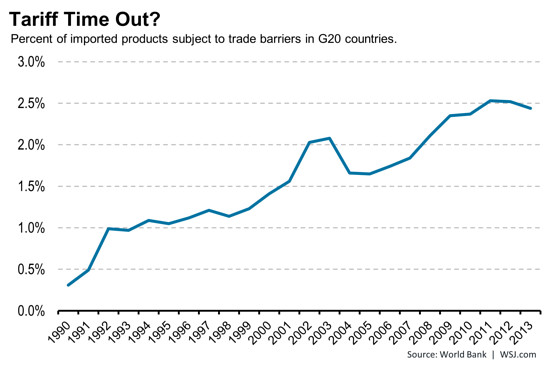 The world’s biggest economies have been quietly raising barriers at their borders since the financial crisis in an attempt to stifle trade and boost struggling domestic industries.

That is the warning from many backers of free trade, who have pointed to hundreds of new tariffs imposed by the Group of 20 leading economies, including the U.S., despite pledges from the G-20 to refrain from interrupting trade.

But the trend isn’t so simple, and there is at least some evidence the wave of protectionism could be subsiding, the World Bank said in a reportThursday. 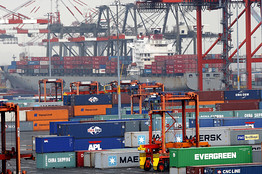 Just 2.4% of products imported by G-20 countries in 2013 were subject to temporary trade barriers—including duties designed to blunt the effect of alleged subsidies or dumping by a trading partner.

That is slightly less than the 2.5% of products affected by trade barriers in 2012 but still well ahead of the 1.8% of products that were affected in 2007, before the start of the financial crisis.

“The data to date provides some evidence that the protectionism arising during this particular crisis may have peaked,” said Chad Bown, the World Bank economist who wrote the report.

But the jury is still out on protectionism trends. The World Trade Organization counted 934 trade-restrictive measures imposed by G-20 nations since October 2008 and not removed by May of this year. That is 78 more restrictive measures than half a year earlier.

According to the World Bank report, the U.S. was among the leaders in removing tariffs last year, canceling barriers against Norwegian salmon, Italian steel, Argentine honey and Brazilian orange juice, the World Bank said in the report.

Still, on a trade-weighted basis, the U.S. has temporary barriers on a greater share of its non-oil imports than any country except for India, according to the report.

The biggest target of U.S. temporary trade barriers is Ukraine, with more than half of shipments from Ukraine affected, the report said. But Ukraine may not be punished so severely for long, since the U.S. and European Union have taken steps to open up trade with Kiev after Russia’s move to annex the breakaway Crimea region.