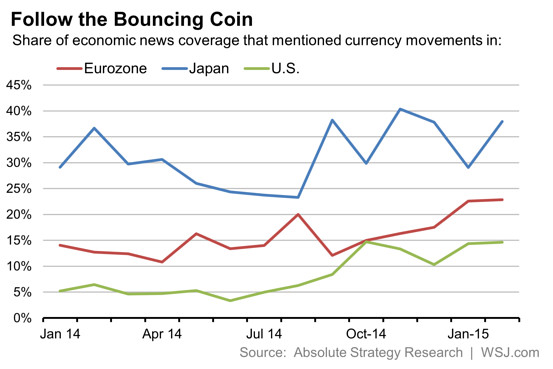 News coverage of the global economy turned slightly positive in February, according to data released Tuesday, and foreign-exchange movements are taking on more importance this year.

The Absolute Strategy Research/Wall Street Journal global composite newsflow index edged up to 50.5 in February from 48.7 in January. An index above 50 denotes positive news coverage on economic topics.

The U.S. newsflow composite index increased to 53.8 from 50.1. While up in February, both the global and U.S. indexes remain well below their averages of fourth-quarter 2014.

Currency swings have become a more important economic topic among major economies. ASR found that 23% of eurozone economic stories reported in January and February mentioned currency movements. That’s up sharply from the 14.6% share averaged in 2014.

The increase corresponds with more accommodative policy announced in January by the European Central Bank. The ECB’s bond buying began Monday. The ECB’s intention to buy bonds sharply weakened the euro versus the U.S. dollar. The euro hit an 11-year low against the dollar on March 6. A cheaper currency is seen as a positive for exports and tourism and thus overall economic growth.

In the U.S., on the other hand, recent mentions of the dollar have been negative for the economic outlook since the dollar’s strength is limiting export growth. ASR found the share of currency mentions picked up in the U.S. to 14.7% in February. While that’s well above the 7% averaged in 2014, it is low compared with the shares in Europe and Japan.

“The lower figure in the U.S. is consistent with the idea that the U.S. is a relatively closed economy, and is less affected by currency swings than, say, Japan,” said James Tasker, economic analyst at ASR. Still, he added, the increased share illustrates the dollar’s strength “is increasingly considered to be an important issue.”

The ASR/WSJ indexes are diffusion indexes that compare the number of positive news coverage versus the number of negative stories on an economic topic. For individual-topic indexes, a reading above 0 indicates more coverage is positive than negative. Absolute Research queries the Dow Jones’ Factiva database for stories that cover six topics: economic growth, analyst estimate revisions to corporate earnings, revenue/sales, employment, inflation and the perception of monetary policy. The ASR/WSJ indexes are released the Tuesday after the release of the U.S. Labor Department‘s monthly employment report.