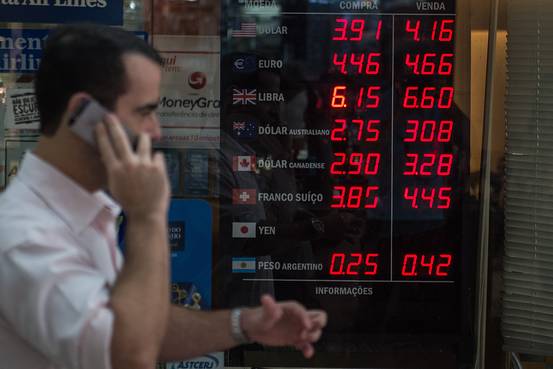 The currencies board of a bureau of change in Rio de Janeiro, Brazil, on Tuesday. A 10% depreciation in a country’s exchange rate—accounting for inflation—can help boost net exports by an average of 1.5% of gross domestic product, the IMF says.
CHRISTOPHE SIMON/AFP/GETTY IMAGES

Currency depreciations get nearly as big a bang for the export buck as they always have, according to a new International Monetary Fund report.

The IMF’s findings may lend credence to efforts by the European Central Bank and other authorities seeking to spur growth through policies that weaken exchange rates. But it could also bolster concerns that a series of tit-for-tat currency depreciations could undermine global growth prospects if policy makers rely on a using exchange-rate devaluations to gain competitive advantage.

An increasingly integrated global economy—where products are assembled in several different countries—has led some to believe that currency devaluations don’t fuel export growth like they used to. Japan’s sluggish rebound in exports despite a 40% depreciation in the yen was the prime exhibit.

Not so, says the IMF in a new study published Monday. A 10% depreciation in a country’s exchange rate—accounting for inflation—can help boost net exports by an average of 1.5% of gross domestic product as cheaper currencies make exports more attractive to foreign buyers, the IMF found.

Of course, the flip side of that coin is that appreciating currencies are a drag on growth as net exports fall.

“There is little sign of a disconnect between exchange rates and trade,” said Daniel Leigh, the chief author of the report. “Exchange-rate movements imply substantial redistribution of net exports across economies.”

More products are being assembled piecemeal in several different countries, canceling out some of the gains from exchange-rate depreciation as they move through economies with varying currency valuations. But that increase in the global value chain has come only gradually over the decades, and appears to have actually slowed, Mr. Leigh said. Roughly three-quarters of all global trade is still primarily sourced domestically.

And Japan’s weak export growth has been muted by three country-specific factors, the IMF argues. Japanese firms tend to keep product prices stable, absorbing currency losses and gains on their balance sheets rather than passing those changes through to customers. In the wake of the yen’s sharp rise after the financial crisis and questionable energy supply after the nuclear crisis, many firms also moved a much larger share of their manufacturing overseas. And with the country’s high-tech expertise, it has become much more deeply integrated into the global value chain than many other nations.

The effect of currency movements across countries is varied, depending on the share that exports represent, the amount of slack in the economy, and a host of other factors.

For example, the impact of the dollar appreciation for Venezuela, where the bolivar is pegged to the greenback and the economy is reliant on oil exports, is seen slashing 12% of GDP from net exports. (That’s on top of the tumbling price of oil.)

On the other end of the spectrum, Ukraine’s net exports are expected to get a 4% GDP gain from a falling hryvnia.

In the U.S., where exports represent around 15% of GDP, the dollar’s surge is cutting around 0.8% of GDP from net exports. And in China, where the yuan is roughly pegged to the value of the dollar, the appreciated currency has shaved off 1.9% of GDP from net exports. (That’s one reason why Beijing may have started to de-peg the yuan from the dollar as markets put downward pressure on China’s currency, some economists say.)

China Fires the First Shot in a Currency War