The share of credit-card bills being paid on time is near a two-decade high,  according to new data released Thursday by the American Bankers Association. Delinquency rates on bank-issued credit cards fell to 2.44% in the first quarter from 2.6% at the end of 2013. The first-quarter figure is barely above the year-earlier reading of 2.41%, which was the lowest rate since 1990. 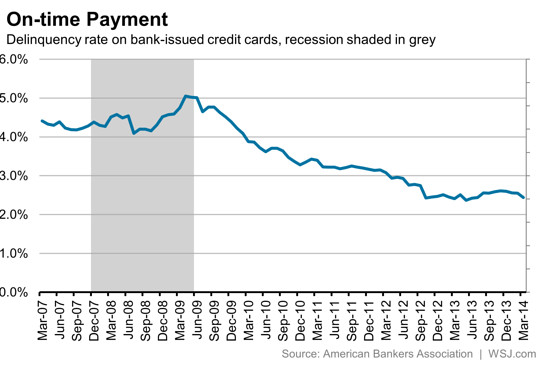 Bank-card delinquency rates are running 36% below their 15-year average. An account is considered delinquent if the payment is 30 or more days late.

The historically low delinquency rates are a double-edged sword for the economy.

On one hand, it suggests most households have their finances well in order and aren’t facing the burdens of late fees and high interest rates associated with poor payment records. On the other, it shows consumers remain risk-averse and might be reluctant to significantly step up spending.

“The financial crisis was a sobering event that made borrowers much more cautious about the level of debt they felt comfortable with,” ABA Chief Economist James Chessen said. Smaller balances make it easier for borrowers to keep up with payments.

Bank-card delinquency rates ran above 4% in 2006 and 2007, before the recession began. Rates peaked near 5% in 2008, before trending down. An uptick in the second half of last year coincided with stronger consumer spending, which then dissipated in the first quarter.

The lower delinquency rate reading is the “counterpoint” to sluggish economic growth to start the year, said Randy Hopper, vice president of credit cards at Navy Federal Credit Union. Weaker growth in consumer spending during an unusually cold winter contributed to the economy contracting at a 2.9% annual pace in the first quarter.

Mr. Hopper expects delinquency rates to move up modestly over the next 12 to 18 months. “We’re already seeing consumers are getting out and spending again and lenders are willing to take on more risk” compared with earlier in the recovery, he said.

Lower delinquency could also reflect Americans using their cards differently than in the past. Many enjoy the convenience of plastic, but diligently pay off balances each month, rather than view the debt as a loan to be paid over time.

Credit-card debt as a share of disposable income dipped to lowest level in more than a decade in the first quarter, according to ABA data. That is “reflecting a growing preference toward not carrying a balance,” Mr. Chessen said.

Thursday’s report found that delinquency rates on other types of loans largely held steady at low levels in the first quarter. A composite index of fixed-term debt, including auto, personal and home-equity loans, edged up in the first quarter to 1.63% from 1.59%, but remained well below the 15-year average of 2.33%.