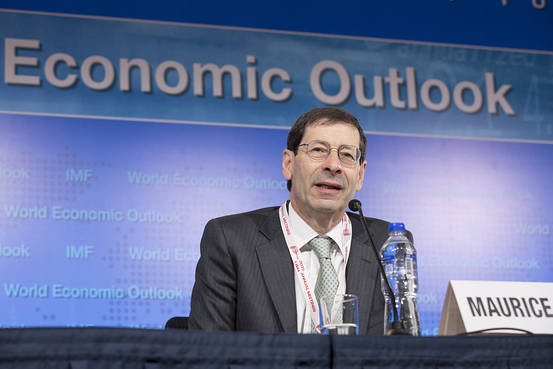 IMF Economic Counselor Maurice Obstfeld at a press conference at the annual meetings in Lima, Peru, last month. “I worry about deflation globally,” he said in a recent interview. “It may be time to start thinking outside the box.”
STEPHEN JAFFE/IMF VIA GETTY IMAGES

The Bank of Japan and other central banks around the world may need to try radical new easy-money policies to stave off the rising specter of deflation and revive sickly economic prospects, the International Monetary Fund’s new chief economist warns.

“I worry about deflation globally,” new IMF Economic Counselor Maurice Obstfeld said in an interview ahead of an annual IMF research conference that focuses this year on unconventional monetary policies and exchange rate regimes. “It may be time to start thinking outside the box.”

Weak—and in some cases falling—price growth has plagued Japan, Europe, the U.S. and other major economies since the financial crisis. Plummeting commodity prices are exacerbating the so-called “lowflation” and deflation problems that curb investment, spending and growth.

Surveying several dozen of the largest economies around the world, Mr. Obstfeld said the number of countries experiencing low inflation is rising. Combined with slowing emerging market output, ballooning government debt and monetary policy constrained by the lower limits of interest rates, the deflation risk is fueling fears the global economy could be fast stuck into a deep low-growth mire.

In the wake of the financial crisis, the Federal Reserve, the Bank of Japan and the European Central Bank launched unprecedented easy-money stimulus programs to avert economic disaster and jumpstart growth. The Fed’s efforts have cut the unemployment rate but failed to sufficiently juice inflation. Tokyo has struggled to pull the long-listless economy out of the doldrums. And the ECB’s efforts have only narrowly avoided a triple-dip recession. Some economists argue the ECB’s actions have pumped up corporate cash reserves, but done little to boost employment or investment.

So, what would be thinking outside the box for Mr. Obstfeld? One option is a proposal by Adair Turner, a member of the Bank of England’s Financial Policy Committee, for central bankers to overtly finance increased budget stimulus with permanent increases in the money supply. By contrast, the increased money supply resulting from recent central bank bond-buying programs is meant to be temporary.

In a paper prepared for the IMF conference, Mr. Turner contends Japan will be forced to use such “monetary financing” within the next five years and says the policy should become a normal central bank tool for all economies facing stagnation.

Such an option would be highly provocative to fiscal hawks and those who fear giving central banks too much power, especially when many economists question both the returns and financial-turmoil side effects from existing easy-money policies.

The provocative nature of the proposal underscores the extent of the deflation-related anxiety among some policy makers, however.

Perhaps a little less controversial option is for central banks to consider overshooting their inflation targets.

“You can always, always deal with high inflation,” Mr. Obstfeld said.  But, “at the zero lower bound, our options are much more limited.”

“In order to bring inflation expectations firmly back to 2% in the advanced countries, where we’d like to see it, it’s probably going to be necessary to have some overshooting of the 2% level, or at least to entertain that as a possibility,” he said.

Although some Federal Reserve board members have floated the idea,  Chairwoman Janet Yellen has given little indication she’d backed the proposal.