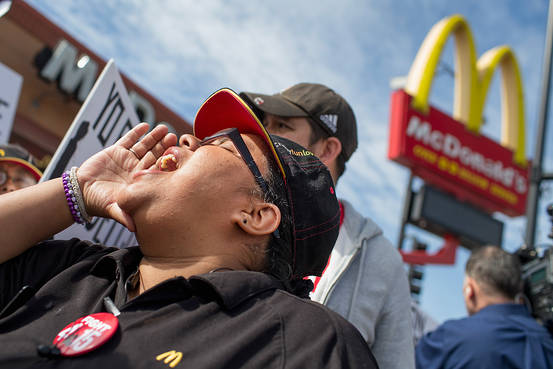 Demonstrators gather in front of a McDonald’s restaurant to call for an increase in the minimum wage earlier this month in Chicago. The demonstration was one of many held nationwide to draw attention to the cause.
SCOTT OLSON/GETTY IMAGES

Democratic lawmakers upped the ante Thursday in their push to raise the federal minimum wage, latching onto an income-inequality debate that is quickly becoming a focal point of the 2016 election.

Sen. Patty Murray (D., Wash.) and Rep. Bobby Scott (D., Va.) proposed legislation to lift the federal minimum wage to $12 an hour by 2020, well above a federal floor that has stood at $7.25 an hour since 2009. The lawmakers say their proposal will boost wages for nearly 38 million Americans.

The proposal remains a long shot after an effort to raise the minimum wage to $10.10 an hour failed last year. Republicans, who control both houses of Congress, have rejected previous proposals because they say it would cost the economy jobs.

The latest push from Democrats comes on the heels of national rallies by fast-food workers demanding higher wages and large employers, including McDonald’s Corp. and Wal-Mart Stores Inc., announcing plans to raise wages for their lowest-paid workers.

It also follows comments from 2016 presidential candidates and potential contenders on the left and right who have focused on weak wage growth and income inequality, albeit with different policy approaches. 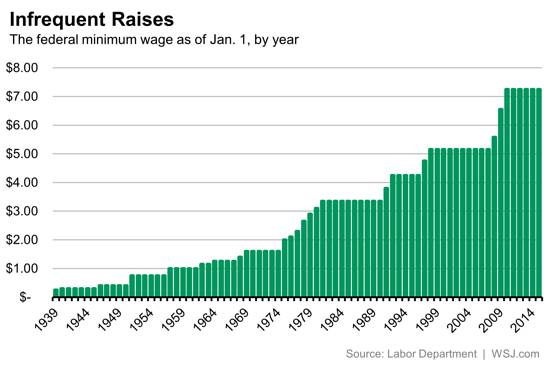 In addition to the higher wage target, the measure would eventually eliminate a lower minimum wage for workers who receive tips and set a formula for automatic increases in the pay floor starting next decade. Currently, Congress must approve any increase.

“The truth is, for most Americans, wages have been stagnant for decades,” Sen. Murray said Thursday. She said her bill “will help prevent workers from falling behind in the growing economy.”

Connecting the minimum wage to the median wage of all workers more directly addresses concerns about income inequality, aiming to ensure the lowest paid workers don’t fall too far behind the middle.

In 1968, when the minimum-wage was near its inflation-adjusted peak, the minimum wage was 52% of the median hourly wage, according to the Economic Policy Institute, a left-leaning group supported by the AFL-CIO and other unions. That share had fallen to 37% last year.

The group’s economists said their initial read of the new proposal would bring minimum-wage workers back in line with the 1968 level by 2020.

Eliminating the tipped minimum-wage is perhaps the most significant departure from previous national proposals. The minimum wage for waiters and other tipped workers has been $2.13 an hour since 1991. Those employees must receive enough tips to bring their hourly rate in line with the minimum wage.

Under the bill, the tipped minimum wage would rise by $1 a year until it reaches parity with the broader mandate.

The restaurant industry, which employs almost half of all minimum-wage workers, has already raised concerns about the bill.

“Restaurants are operating on razor-thin profit margins,” said Angelo Amador, senior vice president of labor and workforce at the National Restaurant Association. “Dramatic increases to the minimum wage and elimination of the tipped wage will hinder restaurant owners’ ability to continue to provide entry-level opportunities.”

A report from the Congressional Budget Office published last year showed an increase to $10.10 an hour would cost the economy about 500,000 jobs. A smaller increase to $9 an hour was projected to cost 100,000 jobs.

More than half of states already have minimum wages above the federal standard. Ms. Murray and Mr. Scott’s proposal would mostly level the playing field.

Massachusetts has set the highest state minimum wage, $11 an hour by 2017. Some cities, including Seattle and San Francisco, have established wages as high as $15 an hour.