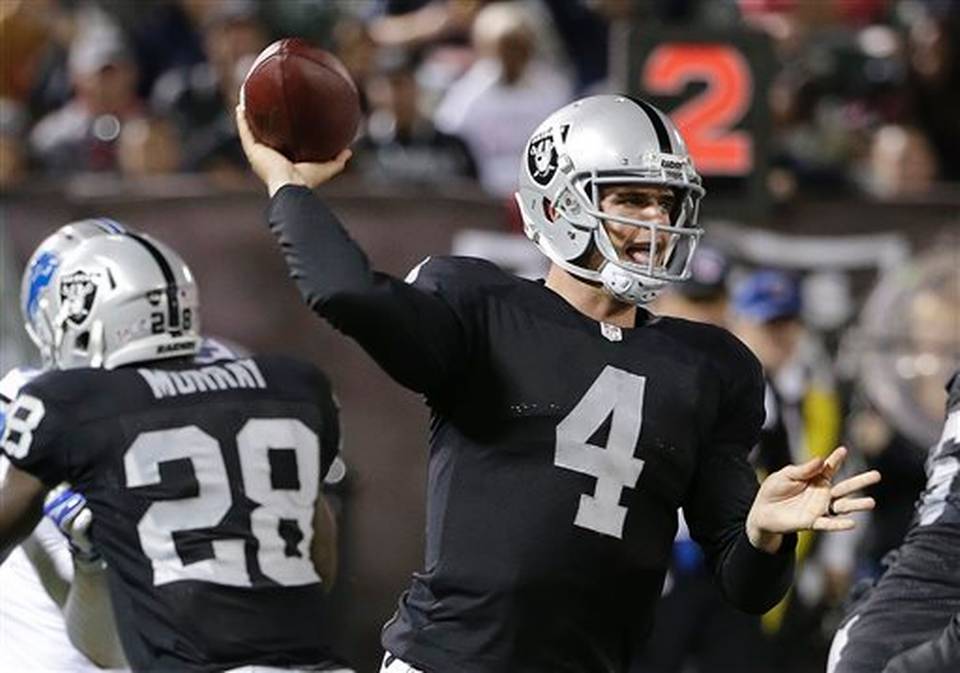 After the Oakland Raiders selected Fresno State quarterback Derek Carr in the second round of May’s 2014 NFL Draft, it was thought that the rookie would spend his first season learning under the tutelage of veteran Matt Schaub, who was penciled in as the team’s starter.

However, with Schaub on the sidelines nursing an elbow injury, Carr got a chance to shine against the Seattle Seahawks in Week 4 preseason action last night (Thurs., August 28, 2014). Carr put on an absolute clinic, torching the Super Bowl champion Seahawks for 143 yards and three touchdowns while completing 11 of 13 passes.

It should be noted that Carr was playing against the Seahawks’ backup defense, and he did get a fortunate bounce when a tipped ball bounced into tight end Mychal Rivera’s hands (courtesy of Vine):

But Carr has made a ton of progress in training camp and the preseason, evident by his on field chemistry with wide receiver Denarius Moore, who caught this perfectly thrown back shoulder touchdown from Carr last night (Vine):

With Schaub injured and most likely unable to start, Raiders head coach Dennis Allen has a decision to make, but from the looks of things, it shouldn’t be al that hard. Carr is head and shoulders above the rest of the passers on Oakland’s roster, yet when speaking to the media after last night’s game, Allen seems to think thee team has three viable starters (via NFL.com):

“We have three guys that can be starting quarterbacks. We’ll have to see where Matt (Schaub) is on Monday.”

Indeed they will, but it’s becoming obvious that Carr is the clear-cut choice to lead the Raiders in the talented AFC West this season. Schaub is running out of juice, and even if he does come back healthy, he just doesn’t present the upside that Carr does.

The Raiders should start Carr soon, or Oakland will most likely find themselves searching for a head coach that will.