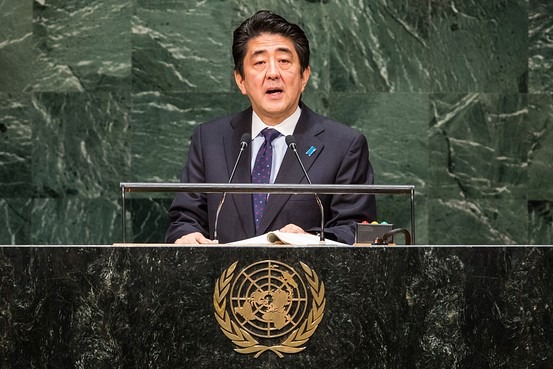 Japanese Prime Minister Shinzo Abe began and ended a trip to New York this week with bold pledges to help advance stalled talks on an ambitious pan-Pacific free-trade pact. But mid-week, his chief negotiator walked out of a Washington session with his American counterpart, after U.S. officials accused Tokyo of moving too timidly on opening up Japan’s agriculture market, leaving the agreement’s fate as uncertain as ever.

“We entered the negotiation with a flexible attitude, but it turned out that we were not on the same page,” a Japanese government spokesman said in a phone interview, explaining the latest breakdown in the talks over the Trans-Pacific Partnership.

This week’s action followed a pattern that has become familiar ever since Mr. Abe won kudos from Americans in early 2013 for telling President Barack Obama during a Washington visit that he was prepared to enter the trade agreement, even though it would mean painful concessions for Japan’s protected and politically powerful farm lobby.

Mr. Abe has made TPP a pillar of reforms he is promoting to revive his country’s long-stalled economy. But Americans have repeatedly complained that Japan’s negotiators have failed to back up Mr. Abe’s words with concrete proposals. While the pact involves 12 nations, the main focus has been on discussions between the U.S. and Japan, by far the two largest economies participating. There’s no formal deadline for completion, but both sides have said they’re aiming to reach an agreement by the end of this year.

This past Tuesday, Mr. Abe made a passionate speech on economic reform at the Council on Foreign Relations in New York. “Japan is determined to boldly contribute to reaching a (TPP) agreement,” Mr. Abe said. “To be honest with you, it is indeed an enormous task to suppress the resistance from the people who have been protected by vested interests,” he added. But “there is no future for them if they are not exposed to competition.”

The speech raised expectations that Tokyo was finally prepared for the kind of dramatic market opening that TPP nations have, in principle, embraced.

But in talks the next day in Washington, Japan’s chief negotiator, Akira Amari, rebuffed American demands on opening up Japan’s beef market, and proposed only a modest reduction in tariffs for beef imports. Mr. Amari also requested in exchange a highly punishing safeguard measure, which would allow Japan to raise tariffs once imports reached a certain level, according to people familiar with the negotiations.

The proposal was viewed by the U.S. as an attempt to maintain the status quo, and U.S. officials threatened to retract an earlier offer to eliminate a 2.5% tariff on Japanese auto parts. The removal of these tariffs could bring major benefits to Japan, given the huge size of the U.S. auto market.

According to Americans officials familiar with the discussions, Mr. Amari abruptly walked out of the negotiation just one hour into the meeting Wednesday – leaving behind stunned U.S. trade negotiators, and 40 sandwiches they had prepared. Americans were planning to hold discussions through lunch and the afternoon, and if necessary, through the evening to move the talks forward.

“The Americans sprung a new complication on their Japanese counterparts,” Japan’s Nikkei business newspaper reported. “Stunned by the sudden reversal, the Japanese side cried sabotage.”

The Japanese government spokesman would neither confirm nor deny whether Mr. Amari walked out of the talks.

The behavior was atypical for Mr. Amari, a patient negotiator who had endured many marathon sessions with his U.S. counterpart, Michael Froman. In April, they held talks for more than 40 hours – over meals and sometimes into the early morning hours.

“The Vice President and the Prime Minister agreed on the strategic and economic importance of the Trans-Pacific Partnership and the need to resolve outstanding bilateral issues in Trans-Pacific Partnership negotiations, including on agriculture and automobiles, as soon as possible,” according to a statement released by the White House. Mr. Froman also attended the meeting, according to his office.

During the session, Mr. Abe indicated he will make more efforts to move the TPP talks forward, according to a person familiar with the matter.

The TPP talks were supposed to wrap up last year, but have been dragging on, in part due to discord over tariffs between the U.S. and Japan. Given the several months it takes to draft a bill to submit to the U.S. Congress, it is widely believed that early next year will be the deadline for the passage of the TPP ahead of the 2016 presidential election.