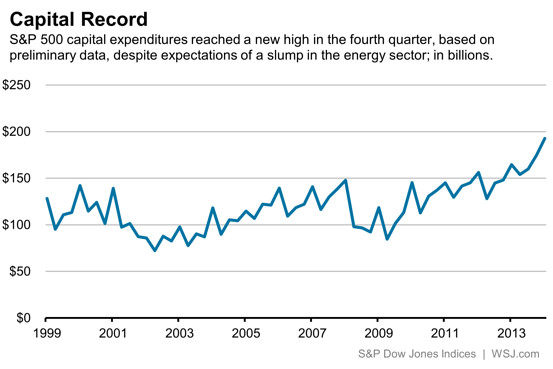 Companies in the S&P 500 reported capital spending of $192 billion in the fourth quarter, up 10.3% from third quarter and up 17% from fourth-quarter 2013, according to S&P Dow Jones Indices.

For the year, capex rose 16.3% from 2013 to $681 billion — which even beats 2001′s inflation-adjusted $637 billion, Senior Index Analyst Howard Silverblatt notes. The data reflect reported results from 95% of the index’s companies.

The energy sector stayed hot, clocking its own record and spending 19.5% more than it did in third quarter, while remaining the biggest chunk of the index’s overall figure at about a third.

The Wall Street Journal reported an increase in capital spending among big companies earlier this month using data for a smaller group of companies in the index.

The S&P data reflects global spending, which means it’s of limited use in forecasting the U.S. economy. Many large U.S. companies generate a third or more of their business outside the country.

And there’s little doubt pullback is coming from energy companies, of course: Plenty of oil and gas companies have announced plans to slash spending, including Chesapeake Energy, which said it would reduce investment by more than a third in 2015, and Pioneer Natural Resources, which said it would cut capital spending by half.

Separately, Silverblatt said cash and equivalents held by S&P 500 companies also set a new record at the end of the fourth quarter, at $1.33 trillion — up from $1.25 trillion at the end of the third quarter and enough to match 82 weeks of estimated operating income for companies in the index.

Fiscal Policy Is No Longer a Drag on the U.S., Business Economists Say

U.S. CEOs See an Improving Economy But Will Hold Steady on Hiring