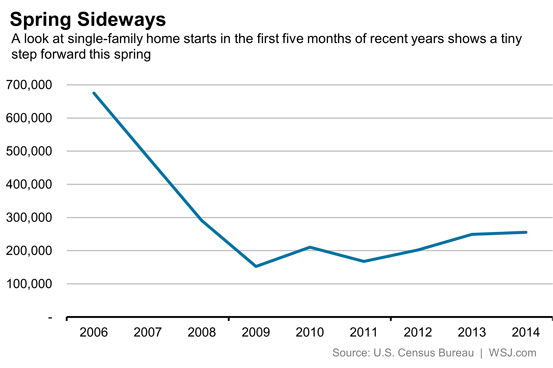 Monthly figures on U.S. home-construction starts make the industry appear bipolar: down significantly in March, up big in April and down again in May.

The reality is, when the focus is broadened to the first five months of this year, home starts have exceeded last year’s tally, although the growth has slowed considerably.

Tuesday’s headlines noted that housing starts in May were 6.5% less than a month earlier. However, the Census’ monthly figures are subject to volatility and substantial revisions. You can get a more reliable picture at this point by examining year-to-date figures, which include most of the spring season.

Consider that, for the first five months of this year, builders started 396,000 dwelling units, not adjusted for seasonality. That’s up 6.6% from the same period last year.

“When we look over several months to smooth out that volatility, construction clearly is recovering, especially on the multiunit side,” said Jed Kolko, chief economist for real-estate website Trulia , referring to apartments and condominiums.

Mr. Kolko added that, over the past three months, construction starts for both multifamily and single-family exceed the year-ago tally by 10%.

The reasons that the new-home market has slowed to smaller gains this year from rather strong gains last year are well chronicled. Chief among them are rising home prices and interest rates. Even so, many analysts still forecast gains in starts and sales for this year.

“I still maintain my belief that we’re going to have continued increases in housing starts on a trend basis through the rest of this year and into next year,” said Brad Hunter, chief economist for home-building research firm Metrostudy, part of Hanley Wood LLC.

Metrostudy forecasts one million home starts for 2014, an increase of nearly 9% from 2013.

Scott Laurie, president and chief executive of Southern California home builder Olson Co., anticipates selling 30% more homes this year than last year. However, much of that is due to the builder starting new projects. On a per-community basis, which is akin to retailers measuring sales at individual stores against their year-ago numbers, the builder’s sales are flat with its totals from last year.

“For us, the best way to quantify it is that we’re doing just as well as we did last year,” Mr. Laurie said. “And last year was a very good year.”