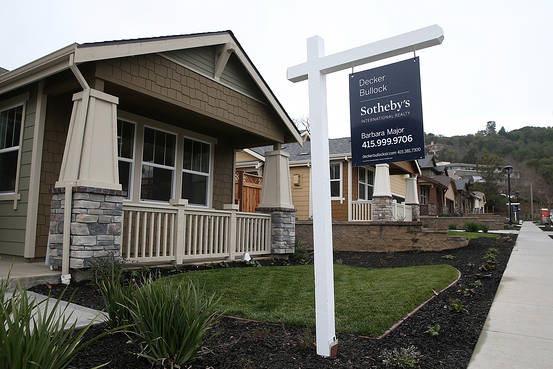 In January, President Barack Obama announced a major mortgage-fee cut for some lower-wealth borrowers. The fee cut brought praise from the real-estate industry and affordable housing advocates but ire from conservatives who thought it would result in riskier mortgages and lower revenues for the cash-strapped agency.

More than half a year from the cut, the number and mix of loans being backed by the Federal Housing Administration have changed markedly. Here’s what happened and how the change affected the mortgage market.

What happened in January?

That was a big deal for typical first-time home buyers, who often favor the FHA because it allows down payments of as little as 3.5% and credit scores of as low as 580.

At the time, the White House said that the cut would enable 250,000 Americans to buy their first home within the next three years.  Some conservatives, on the other hand, worried that the cut would hurt the FHA’s finances without the big gain Mr. Obama promised.

An analysis of the FHA premium cut by Moody’s Analytics’ Mark Zandi performed soon after the announcement estimated the cut would result in 45,000 more home sales in 2015 and 20,000 more single-family home starts. Mr. Zandi also estimated that the FHA’s insurance fund would reach its legally mandated 2% capital ratio by 2018, about a year later than he estimated previously.

What’s happened since then?

According to research by Andy Winkler, director of housing finance policy at the right-leaning American Action Forum, the number of home buyers has increased, but some of the gains are going to more well-heeled buyers that the administration didn’t intend to target.

The fee reduction, for example, made the FHA program more attractive to borrowers with higher credit scores, Mr. Winkler says. The percentage of FHA endorsements where the borrower had a credit score above 680 grew to 45% in the second quarter, up from 41% in the fourth quarter of 2014, he says.

The percentage of FHA loans with high balances has also gone up, and overall, the FHA’s share of the mortgage market rose to 32% in the first quarter. 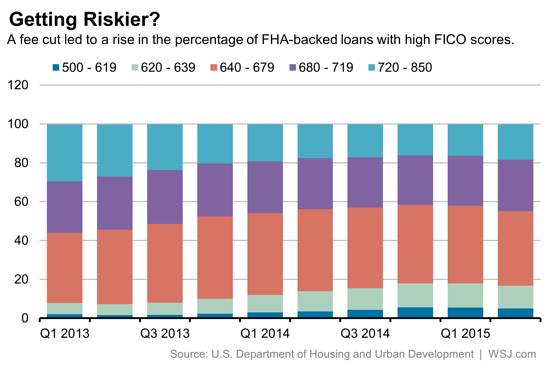 To be sure, the shift was expected.

When finding a mortgage, buyers or their lenders are often weighing the FHA program against options available from mortgage-finance companies Fannie Mae and Freddie Mac , which back loans with down payments of as little as 3%. By cutting fees, the FHA became the most cost-effective option for more borrowers.

Edward Pinto of the American Enterprise Institute in July criticized the decision to cut fees, saying in part that the premium cut resulted in borrowers buying more expensive homes rather than saving money. Mr. Pinto said that FHA’s increase in loan volume came at the expense of other housing programs.

Did the fee cut hurt taxpayers?

Also perhaps unsurprisingly, the cut in FHA fees reduced the revenues per loan that the agency brings in, Mr. Winkler notes. The FHA estimates that for every $100 the program guarantees, the agency makes $5.35 in profit, down from $9.03 before the cut, Mr. Winkler says.

The reduced revenues for the program were the immediate target of Republican lawmakers and some conservatives after the fee cuts were announced.

The law requires the FHA to maintain a capital buffer of at least 2% of the loans it guarantees, a threshold it hasn’t met since 2009. HUD Secretary Julián Castro has said that the department expected the fee cut to delay reaching the threshold by “a few months.”

HUD and lawmakers won’t get an official update on the financial impact of the fee cut until later in the year, when an independent actuary comes out with its report on the FHA’s finances. The actuary’s outlook is typically heavily influenced by assumptions it makes on the direction of home prices and interest rates, making it difficult to predict the outcome even knowing that fees dropped.

Is the fee cut bringing in more first-time buyers?

All else being equal, cheaper mortgages should make buying a home affordable for more people.

Problem is, all else isn’t equal. This year, home prices have risen sharply, hurting affordability. Some researchers suspect that a small portion of the rise in prices might even be a result of the fee decrease.

On the other hand, mortgage rates dropped early this year, helping to spur a hot start to the spring selling season.

All that’s to say that it’s near-impossible to isolate the fee decrease and calculate what would have happened to first-time home buying but for the cut.

That said, so far this year, FHA originations in the first quarter ran more than 30% higher than they did through the same period a year ago, according to Inside Mortgage Finance.

On a percentage basis, Mr. Winkler says 83% of FHA loans went to first-time home buyers in May, unchanged from a year earlier.