Did We Hit Our Innovation Peak in 1970? – Real Time Economics 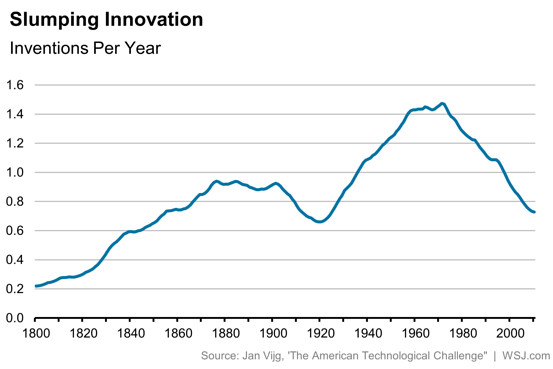 Has the wave of innovation that transformed the world over the past century fizzled out?

Some people think so—although how innovation is measured can be very subjective, if not downright idiosyncratic. Some experts count patents. That can be misleading, though, since many things patented today represent only tiny advances—not major breakthroughs. Others have downloaded the list of historic inventions from Wikipedia and point to the decline of recent decades to argue that our inventiveness has passed its peak.

One of the more unusual books on the subject is “The American Technological Challenge” by Jan Vijg, a Dutch-born molecular geneticist at the Albert Einstein College of Medicine in New York.

“I wrote this more out of frustration than anything else,” says Mr. Vijg, who emphasizes that he is not an economist. He was inspired by an airplane trip in 2006—when he noticed that the plane to Amsterdam wasn’t much different from the one that brought him to the U.S. for the first time in 1984. “I just asked myself, how is this possible?” he says.

In his book, Mr. Vijg compiled a list of more than 300 “macro-inventions” that were made between 500 BC and 2010. A macro-invention is a major breakthrough—like the invention of the windmill—that opens the way for other refinements. In the case of windmills, for instance, that would include modern wind turbines. Mr. Vijg says he borrowed the concept from Northwestern economist Joel Mokyr, subject of a story in today’s Wall Street Journal.

Mr. Vijg found inventions accumulated rapidly in the last century. But tellingly, the uptrend stopped and turned downward around 1970 and hasn’t recovered yet. “What we’re seeing is not technological decline—it’s deceleration,” he says.