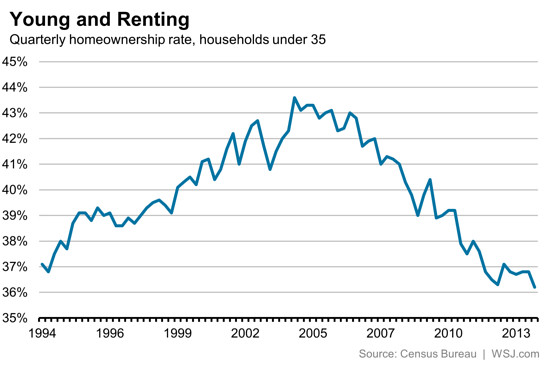 It’s tempting to make sweeping statements that millennials don’t want to own anything and would rather rent it all—from cars on Uber to movies on Netflix to apartments on Craigslist.

“I think there’s a lot of more conventional, mundane explanations for what we’ve seen” when it comes to depressed homeownership rates for 18-to-34 year-olds, Mr. Furman said at a housing conference in Washington sponsored by Zillow on Thursday.

Key to solving the puzzle are answers to these two questions: when will millennials launch out on their own, and why haven’t they yet? Economists follow a key measure known as headship, or the number of people counted as the head of a household. Headship rates within different age groups tend to fall in sync with rising unemployment, and vice versa.

The idea that there’s been a permanent shift in millennials’ housing preferences is hard to prove conclusively, but Mr. Furman says other factors “call this interpretation of the data into question.” For one, homeownership rates declined across all income levels during the recession, with the largest drops among the highest earners. Mr. Furman says that reflects the large jump in unemployment more than anything else.

One troubling sign is that even though the economy has been adding jobs in recent years, the recovery in headship rates among millennials “has fallen well short of the recovery in the unemployment rate,” said Mr. Furman.

A possible explanation: the recession may have hit the parents of millennials particularly badly, too, hurting their ability to help their adult children do things like make a down payment on a home. Younger adults also have higher levels of student debt and have graduated into particularly weak labor markets.

Mr. Furman said that the issue of student debt ultimately depends on whether higher education produces decent returns for young adults. If higher education leads to better jobs and incomes for young adults, then the low rates of homeownership for millennials may prove temporary. “Schooling, rather than debt, is delaying household formation and homeownership to later in the life cycle,” he said.

The gloomier scenario is one in which more students don’t get their degree but graduate with a lot of debt. If more borrowers damage their credit by defaulting on their student loans or can’t manage their payments well enough to take on new debt, then student loans could take a bigger bite out of home sales.

All of this isn’t to say Mr. Furman was entirely dismissive of the potential for a broader shift in millennials preferences. It’s just that cyclical trends and demographics that predate the recession seem more likely explanations. “I like to work through those, and if there’s still a large mystery left, then [you can] point to Netflix and Uber and whatever else as something fundamentally changing society,” he says.