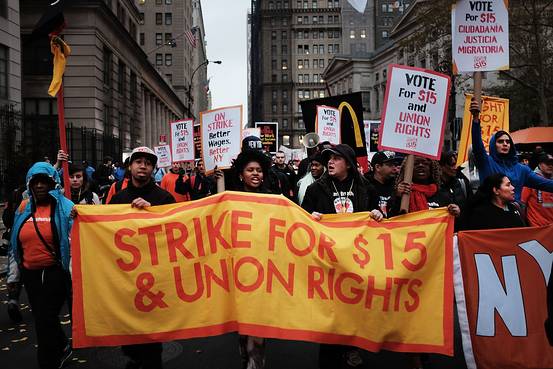 Not so, says a new study that found federal and state minimum-wage boosts have had no statistically significant impact on working-age adults’ net use of several such programs, including Medicaid and the Supplemental Nutrition Assistance Program formerly known as the food-stamp plan.

It’s a less-explored part of a years-old debate between economists who have researched the hot-button topic of minimum wage and its effects on the U.S. economy.

The difference with this new report, being released Friday, its authors say, is that it looks at a wider swath of government assistance programs over a longer period of time and across multiple major data sources, including those with information on welfare caseloads and expenditures.

“We were trying to bring some more harmony and understanding across the different studies” that have already been conducted, said Joseph Sabia, an associate professor in San Diego State University’s economics department. He conducted the research with graduate student Thanh Tam Nguyen.

In addition to SNAP and Medicaid, the study looked at the effect of minimum wage increases on participation in four other public programs: the Free and Reduced Price School Nutrition Program, Housing Assistance programs, Temporary Assistance for Needy Families, and the Special Supplemental Nutrition Program for Women, Infants and Children. It used data from sources including the Current Population Survey, the Survey of Income and Program participation, the U.S. Department of Health and Human Services, and the National Income and Product Accounts. The examination spanned three decades and 50 states plus the District of Columbia.

Mr. Sabia said higher minimum wages did help some workers get off the welfare rolls but others stayed stuck because of adverse employment effects such as a reduction in jobs or hours worked. While each 10% minimum wage increase resulted in reduced receipt of SNAP and WIC, for example, the amounts weren’t statistically significant and at the same time the receipt of school-nutrition assistance and housing assistance increased.

Two years ago, proponents of boosting low wages strategically shifted their focus to U.S. taxpayers, issuing two studies contending the public unfairly foots the bill for billions of dollars in public assistance for fast-food workers. The companion studies issued by the University of California, Berkeley, and the National Employment Law Project—an advocacy group for the working poor and unemployed—drew praise and criticism that reflected the often-partisan divide over boosting minimum wages.

One previous study Mr. Sabia is challenging is a 2014 paper updated last year by Rachel West, now a senior policy analyst at left-leaning Washington think-tank Center for American Progress, and Michael Reich, an economics professor at the University of California, Berkeley.

Mr. Sabia said that study’s model was flawed in part because it didn’t examine the impact among workers and nonworkers. A portion of his study set out to examine that using the same model and produced results that made the prior study’s findings hard to believe, Mr. Sabia said.

Ms. West acknowledged that her study didn’t examine the effects on workers versus nonworkers, but she said she stands by her results.

“The goal here is to see the overall fiscal response to social-assistance spending to the increase in the minimum wage. We’re not being pedantic about it,” she said. She added that she hadn’t seen Mr. Sabia’s research and emphasized that a higher minimum wage is not a panacea for curbing public assistance but “an important policy tool.”

The earned-income tax credit is a complement to that, “not a substitute,” she said.

Get a Job? Most Welfare Recipients Already Have One

Food-Stamp Use Is Now the Lowest Since 2011

One in Five U.S. Children Depends On Food Stamps