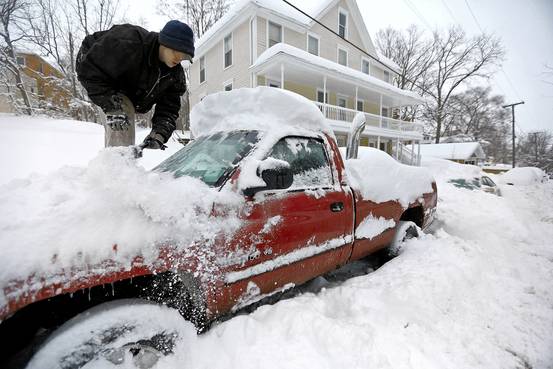 Bad jobs weather: A man clears snow from his truck after a late-March Midwestern snowstorm dropped 15 inches. The high number of people unable to get to work may explain why the average workweek declined.
DAVE KETTERING/ASSOCIATED PRESS

Is the U.S. economy in trouble? That could be one way to look at Friday’s weak employment report. But there’s little reason to think the lull will last.

Payrolls increased just 126,000 new jobs in March, about half what forecasters expected. And January and February payrolls were revised down a total of 69,000. For the first quarter, payrolls grew an average of just 197,000, down sharply from the 324,000 pace of the fourth quarter of 2014.

However, that surge in hiring at the end of last year is one reason to not get apoplectic about the latest job report and what it says about the economic outlook. The end of 2014 saw the best quarterly hiring of this expansion. A downshift in early 2015 should not have been a total shock.

That’s especially true because falling oil prices, while a net positive for the total economy, continue to hurt certain sectors. No surprise that in March job losses were reported in industries that support mining activities, at heavy- and civil-engineering sites and at petroleum-product makers.

Weather may also have been a small factor in the March weakness. Labor Department data show 182,000 employees could not make it to work in March because of bad weather. That’s about 30,000 more than the average of the previous 10 Marches.

The high number of people unable to get to work probably explains why the average workweek declined by six minutes. 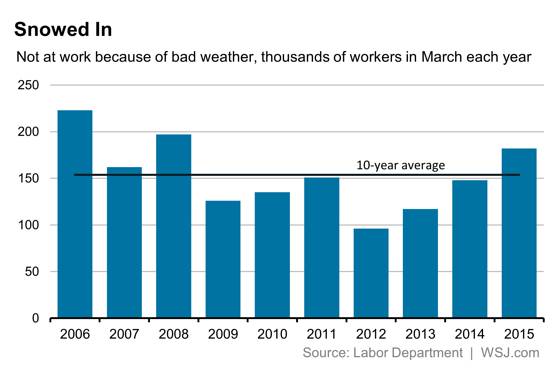 One sign that demand for labor is healthier than March’s top-line job number suggests is the 0.3% advance in average hourly pay. That was better than the 0.2% expected.

To be sure, the yearly increase in pay was a modest 2.1% in March. But job openings in January were at a multiyear high and companies like Wal-Mart and McDonald’s have already announced pay raises as a way to keep and attract workers at the low end of the wage scale. A string of 0.3% monthly pay raises could finally shake yearly wage growth out of its 2% rut. Faster income growth will be a big positive for the economic outlook.

The hiring slowdown corresponds with other weak data reported in the first quarter. Economists have been marking down their estimate of last quarter’s gross domestic product growth. The Commerce Department will report its advance look at first-quarter GDP on April 29, and a rate below 1% would not be shocking. However, the disappointing March report does not suggest 1% growth is continuing this quarter. If anything, activity lost in the winter should be made up in the spring.