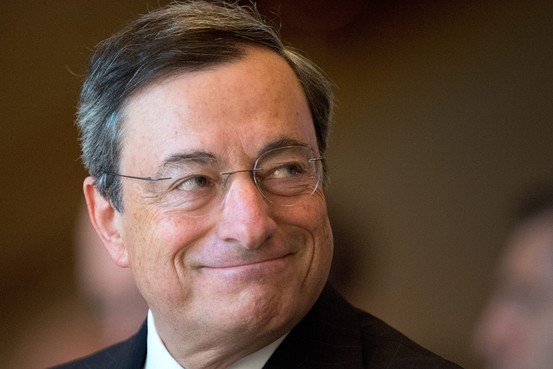 Just sharing a currency isn’t enough for the eurozone to defy its skeptics, European Central Bank President Mario Draghi said Thursday in a speech that reminded his audience about the foundations needed for a successful single currency area.

“Doubts over the viability of [economic and monetary union] will only be fully removed when we have completed it in all relevant areas,” said the ECB head.

“This means Banking and Capital Markets Union; it means Economic and Fiscal Union.”

Draghi’s remarks come as over two years after he promised that the ECB would do “whatever it takes” to preserve the euro.

Soon thereafter, the ECB announced a plan to buy the bonds of struggling eurozone states if they agreed to an international reform program. Though the ECB has never actually used this plan, which has come under legal challenge in Germany, it is credited with reviving sentiment in the currency bloc and reducing the likelihood that it would break up.

Risks of a breakup of the currency have abated, but the ECB now faces the challenge of how to combat extremely low inflation, which threatens to turn into deflation, a damaging economic development in which prices and wages fall.

Recent comments from Draghi and his top deputy Vitor Constancio suggest that the central bank is getting ever closer to buying sovereign bonds on a large scale, possibly early next year. The ECB has largely resisted such quantitative easing, as it’s known, though the approach has been embraced by the Bank of Japan , the Bank of England and the Federal Reserve.

Draghi didn’t touch on current-monetary policy issues in his speech.

Countries inside the currency bloc have to react as effectively to economic shocks as they would when outside of the currency zone. “Members have to be better off inside than they would be outside,” Draghi said. Otherwise doubts could arise about whether parts of the bloc would need to break away, setting a dangerous precedent.

One country’s exit from the eurozone would undermine “the fungibility of money, as bank deposits and other financial contracts in any country would bear a redenomination risk.”

Such a scenario isn’t theoretical. “We all have seen first-hand, and at considerable costs in terms of welfare and employment, how fears about euro exit and redenomination have fragmented our economies,” Draghi said.

“The euro is – and has to be – irrevocable in all its member states, not just because the treaties say so, but because without this there cannot be a truly single money.”

The ECB next policy meeting is on Dec. 4th.