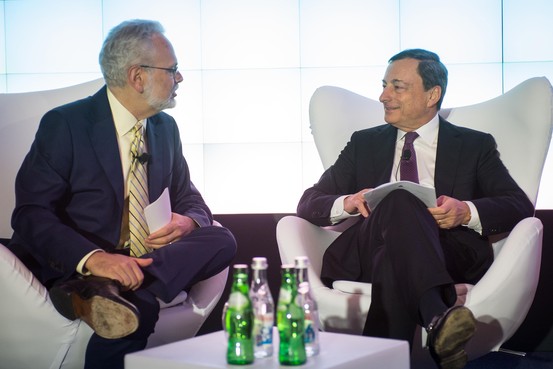 David Wessel and Mario Draghi at an ECB conference last week in Portugal.

In July 2012, European Central Bank President Mario Draghi vowed to do “whatever it takes to preserve the euro, and, believe me, it will be enough.”

Those words proved very powerful: Mr. Draghi turned the markets without spending a single euro. The ECB was never called upon to deliver on its much ballyhooed conditional promise to buy government bonds, the Outright Monetary Transactions program, known as OMT.

Times change. On Tuesday, the ECB (finally) decided it had to put some money where Mr. Draghi’s mouth is. You can read about the details elsewhere on this site . The ECB isn’t (yet) buying a lot of government bonds or other assets, as former Federal Reserve Chairman Ben Bernanke did in the U.S.

But it did bundle together pretty much everything short of that–including levying a fee on banks that leave money at the ECB instead of lending it out, pumping more cash into the system at low rates for four years, promising to keep rates very low for a long time and inventing new acronyms. (That last part led my Brookings Institution colleague Justin Wolfers to suggest on Twitter that economists might measure the severity of economic conditions by the increase in the number of acronyms used by policymakers.)

And here’s a handy cheat sheet.

There’s a strong case that the ECB is well behind the curve, given that inflation is running at 0.5%, well short of its stated target of “close to, but under 2%.” Mr. Draghi, it seems, decided to wait until things got bad enough for Jens Weidmann of the Deutsche Bundesbank to go along. (Impatient that no reporter asked at Tuesday’s press conference, Mr. Draghi volunteered that the governing council’s decision was “unanimous.”)

There will be a lively debate about whether all these moves will actually produce more lending and, thus, more prosperity. Mr. Draghi himself acknowledged it might be “three or four quarters” before the economy feels the oomph. Steve Blitz of Investment Technology Group said the ECB had given banks a strong incentive to move money to non-financial corporations, which is the goal, but he predicted those companies will be reluctant to use it to hire or invest because there’s so little demand in Europe. He called it “moving from one front-porch rocking chair to another.”

Mohamed El-Erian, the former PIMCO executive, describe the bundle of ECB initiatives as “ambitious and impressive,” but wondered aloud “if monetary policy alone can achieve European liftoff.” It probably can’t, and the reluctance of Europeans to loosen their fiscal straitjackets must frustrate Mr. Draghi (who called, again, for “growth-oriented fiscal consolidation” that includes more spending on infrastructure, not only government spending cuts. Taking the euro down a notch should would give European exporters a boost, but after initially pushing down the currency as Mr. Draghi spoke, the markets then pushed it up.

But one substantial ingredient in nursing an ailing economy, as Mr. Draghi demonstrated in his July 2012 speech, is psychological. The euro zone itself has held together longer than its skeptics expected when Greece run into trouble. The next challenge is to rev up growth and avoid a long stretch of stagnation and misery. Mr. Draghi is trying to assure stock and bond markets (which reacted favorably) and European businesses and consumers that while European governments are paralyzed by adverse politics, the ECB is not. It will do whatever it can. And if banks will lend a bit more, and businesses will spend and hire a bit more, the economy will get better. (It recalls The Little Engine That Could: “I think I can. I think I can.”)

Painfully aware that suggesting the ECB has done all that it can would be terrifying, Mr. Draghi vowed to do more if necessary, leaving the door open to large-scale asset purchases. “If need be, we are not finished here,” he said.

One big question, unanswerable, lingered after the press conference ended: Will it be enough?