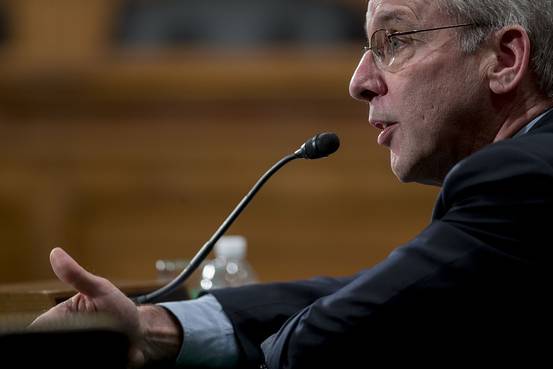 The recent string of disappointing U.S. economic data is setting the bar higher for the Federal Reserve to begin raising rates this June, a top Fed official said Wednesday.

“If you look at the broad set of data that we’ve gotten in recent months, data has very much surprised to the downside,” said William Dudley, president of the Federal Reserve Bank of New York, speaking at a Reuters Newsmaker event. “It’d be reasonable to think that the timing of the Fed’s first rate hike might be a little further off in time. I can imagine a situation where a June rate hike could still be in play….but obviously it’s a bigger hurdle because we’ve had a lot of weak data. Now you have to see sufficient data on the other side. Now the bar is a little higher.”

Mr. Dudley, a voter on the Fed’s policy-setting board, pointed to still-subdued inflation and disappointing factory data, in addition to the weak March payrolls report, that have painted a downbeat picture of the U.S. economy lately. In a speech on Monday, the official estimated the economy expanded at an annual rate of just 1% in the first quarter. While the official didn’t take the possibility of a June interest-rate increase off the table, he noted that there are reasons the Fed would rather risk tightening policy too late than risk acting too early.

“There are reasons to err on the side of being late than being early,” Mr. Dudley said. “If you have to reverse course, you’re back at the zero bound [for interest rates], and you will have lost some credibility in terms of monetary policy.”

The central banker added that another reason to be cautious about raising rates is the large number of Americans who have been out of work for a long time. In the aftermath of such a severe financial crisis, he said, it is important to get those people back to work in the next few years before skills atrophy.

Still, Mr. Dudley said it’s reasonable to believe the Fed’s lift-off process will begin some time in 2015. While consumer spending, business investing and the housing market are recovering more slowly than he would like, Mr. Dudley said he is seeing a small uptick in wages and that temporary factors like winter weather likely play a large role in impacting first-quarter activity.

“The view in the market is still that a rate hike is still more likely than not this year, and that seems like a reasonable expectation to me,” the said.

The official reiterated that the Fed’s policy decision will depend on trends in incoming economic data, while not putting too much weight on any one specific data point, such as last Friday’s employment report. That release showed the U.S. adding just 126,000 jobs in March.

In March, the Fed’s policy board opened the door to raising rates this year when it removed the phrase that it will remain “patient” about tightening policy. Instead, the policymakers said they want to become “reasonably confident” that inflation will rise back toward the Fed’s 2% objective before raising rates.

Mr. Dudley elaborated on that point Wednesday, saying a number of factors go into generating “reasonable confidence” about inflation.

“The size and amount of slack we have left in the economy and how fast that’s being exhausted, and what we think is going to happen in the future — all those things are important in addressing the reasonably confident criteria,” he said.

Eventually, when the Fed does pull the trigger, Mr. Dudley warns, there’s “tremendous uncertainty” over how financial markets will react, recalling the 2013 “taper tantrum” when Treasury yields spiked after then-Fed Chairman Ben Bernanke mulled the idea of reducing the Fed’s bond purchases.

“That seemed pretty benign to me,” Mr. Dudley said, stressing that if market conditions were to crimp in reaction to the Fed’s rate hike, it could warrant a slower tightening process. “You need to consider financial market conditions for what to do in monetary policy.”

Longer-term, Mr. Dudley said he believes a slower trend in U.S. economic growth of around 2% will likely warrant a lower long-run policy rate. He projects, admittedly without much confidence, a long-run policy rate of 3.5% compared with its 4.25% historical average.

Grand Central: A Roadmap to the Fed’s Thinking on the Jobs Report

How High Are Long-Term Interest Rates Likely to Rise?