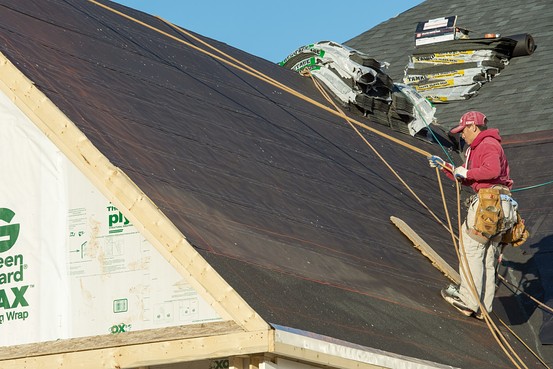 A worker helps build the roof of a new home in November. A monthly survey of 220 home-builder representatives by John Burns Real Estate Consulting Inc. found that their per-community sales pace declined by an average of 20% last month from November last year.
Agence France-Presse/Getty Images

Early gauges of new-home sales in November point to a lackluster, if not disappointing, result as consumers remain hesitant despite the improving economy.

Even so, a few builders reported a lift in sales contracts inked last month, hinting that the end of election season perhaps alleviated anxiety for some buyers.

A monthly survey of 220 home-builder representatives across the U.S. conducted by housing research firm John Burns Real Estate Consulting Inc. found that respondents’ per-community sales pace declined by an average of 20% last month from their pace in November 2013. A measure of per-community sales gauges the average number of homes a builder sold across its various projects at a given time.

On the basis of the total national volume of sales, the November result likely is closer to a small decline or break-even with a year earlier. That’s because the measure of per-community sales used by Burns and others focuses only on sales pace, neglecting the gain in overall volume that comes from a builder expanding its number of communities under development in the past year.

The Commerce Department is scheduled to release its data on November new-home sales on Dec. 23.

“The mood of the industry heading into next year is extremely cautious,” said John Burns, CEO of his namesake firm based in Irvine, Calif. “Nothing has happened to cause sales to slow this much. But prices rose so fast in 2013, so that’s probably the primary culprit.”

This year has shaped up to be a giant stall for the new-home market, as sales through the first 10 months mustered only a 1% increase from the same period a year ago. Buyers had been hamstrung for the second half of last year and much of this year by a litany of challenges, including tepid job and wage growth, mounting student debt, tight mortgage-qualification standards and rising home prices. Yet, as the economy has gained momentum, wages and job growth have improved, and regulators and lenders are beginning to ease credit standards for buyers.

That leaves as obstacles student debt and home prices that, in the case of newly built homes, have risen by double-digit percentages for much of last year and this year. In October, the gap between the median price of a newly built home ($305,000) and that of an existing home ($208,700) was at one of its widest points in recent years ($96,300). That price differential likely cowed buyers in November.

“Our surveys also show that November was rather weak relative to a year ago,” said Brad Hunter, chief economist for housing research firm Metrostudy, part of Hanley Wood LLC. “What we’re seeing is that (home-buyer) traffic is lower than a year ago in November. Those trends continued into what we’ve tracked so far in December.”

Residential construction has bearing on the broader economy in that it typically accounts for 5% of U.S. gross domestic product. However, it has been somewhat of a drag on the economy in recent quarters, contributing only 3.1% of GDP, according to the National Association of Home Builders. The association estimates that the construction of a new home creates, on average, three full-time jobs for a year.

Some builders, however, are seeing signs of more activity from buyers. While many national builders reported lackluster results for their recent quarters, D.R. Horton Inc. posted a 38% gain by focusing on lower-priced homes and using more sales incentives to coax buyers into deals.

Bill Davidson, president of California builder Davidson Communities, said his sales increased by 80% in November after the midterm election from October. Davidson, based in Del Mar, Calif., typically sells 250 homes a year. Last month, Davidson had 45 homes in the process of being sold.

“After the election, we started seeing buyers coming off the fence,” Mr. Davidson said. “I think there was a lot of anxiety going into the election and in the third quarter with world events. That seems to be calming down somewhat.”

Home Builders Feeling Great in the West, Glum in the Northeast