Eastern Ukraine: Back to the barricades 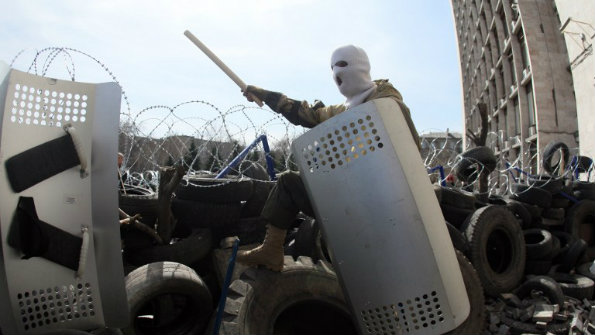 THE situation in eastern Ukraine has moved into a new and ominous phase. Shooting was reported on April 12th in Kramatorsk and Sloviansk, two towns in which disciplined, armed and uniformed men seized control of police buildings. Arsen Avakov, Ukraine’s acting minister of the interior, accused Russia of “an act of aggression”.

No troops have crossed the border in the conventional military sense but what is now playing out across the east, including the seizure of the interior ministry building in Donetsk, appears co-ordinated and has the hallmarks of a Russian operation. Men have appeared in unmarked uniforms as they did in the run up to the annexation of Crimea in March. Roadblocks are springing up. Pro-Russian forces now control the two main roads from Kiev to the east.

In the Donetsk interior ministry, uniformed members of the Berkut, the riot police force, which was officially disbanded following the fall of the government of president Viktor Yanukovich in February, are in control. On the morning on April 12th the local interior ministry chief was forced to resign. A new one has been appointed but a source in the police station said that he was out of the country and had promised to return by Monday.

As night fell, masked men were strolling in with bags of food, bottles of water and boxes of biscuits. Posters of the so-called Donetsk Republic declared by pro-Russian activists who have held the city’s main administration building since April 6th had been sellotaped over the police insignia on the walls. Answering the question of why policemen had switched sides, Vitaly, who would only give his first name, said: “We were on this side from birth”.

Citizens of Donetsk, which is an overwhelmingly Russian-speaking city, are going about their business as usual. On Saturday there were only a few hundred gathered by the barricades in front of the administration building. No one seemed to think that war was coming or that there was a significant risk of one.

No one appears to be laying in stocks of flour, oil and the other staples people usually buy when there is a fear of war. Tamara Budkovska, a 57-year-old handing out newspapers in front of the occupied administration building, said that there would not be a war, “because the Berkut is with us and the police is with us”. She added that Americans in uniform had come to Donetsk but had “refused to attack us”. Russia’s media is now engaged in what is regarded by Ukrainians as a fully fledged disinformation campaign, the main thrust of which is that the new government in Kiev is one of “fascists”.

If Russia’s aim was to provoke major uprisings in the east, to provide an excuse to intervene militarily or force federalisation on Ukraine, that has failed, at least for now. Instead, a new phase has begun which is following a pattern similar to that seen in the run up to the annexation of Crimea.