HealthMap’s interactive Ebola outbreak map starts with just one dot, representing 23 deaths in Guinea from a “mystery hemorrhagic fever” on March 19, 2014. At the time, officials didn’t know they were dealing with what would become the largest Ebola outbreak since the deadly virus was discovered in 1976.

At first the map had just a few dots, but by yesterday, it was pockmarked with Ebola cases – 1,603 of them in four West African countries including 887 deaths.

“It paints a picture of how this outbreak has slowly spread across international borders and is building up and remaining uncontrolled,” said John Brownstein, a computational epidemiologist at Boston Children’s Hospital who also served as a consultant for the 2011 movie “Contagion.”

Ohio Woman Being Tested for Ebola

Brownstein co-founded HealthMap, an interactive outbreak mapping tool, nearly a decade ago. His team of about 45 people uses code to scour the web for outbreaks, sifting through news websites, government pages and social media in 15 languages across the globe. 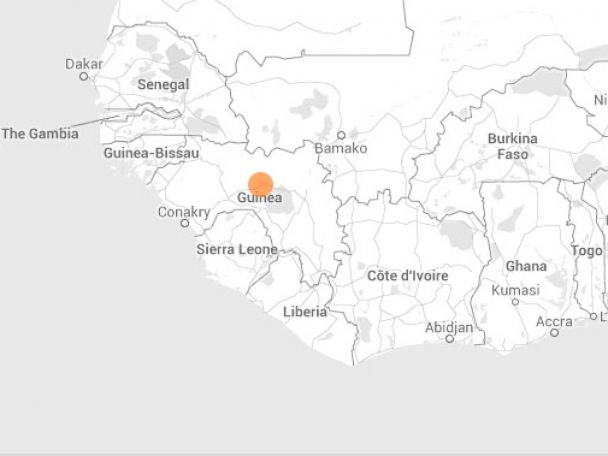 PHOTO: The Ebola outbreak started with a “mystery hemorrhagic fever” that killed 23 people in Guinea, according to the website.

HealthMaps created a separate Ebola page shortly after the current outbreak began this spring, but its traffic has skyrocketed in recent days. On Monday, the page got more than 50,000 hits.

Brownstein said this Ebola outbreak is unique because it is the first time health workers have been unable to quickly limit Ebola transmissions.

“What we’ve seen here — because of inadequate public health measures, because of general fear — is it truly hasn’t been kept under control,” he said. “The event started, calmed down and jumped up again. Now, we’re seeing movement into densely populated areas, which is highly concerning.”

Click here to view the map on HealthMap.org, and press play to watch how Ebola spread. 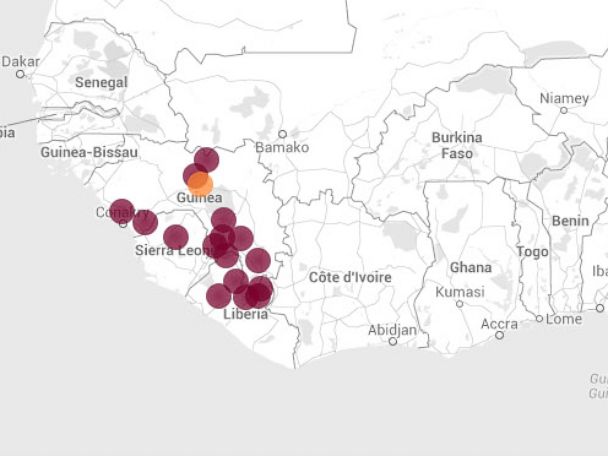 PHOTO: By April, the outbreak spread to Sierra Leone and Liberia.