Ebola Outbreak: Looking for Hope in a Hot Zone

MONROVIA, Liberia – Walking through a makeshift Ebola ward, it’s hard to believe that anyone could survive.

Four men sit on plastic chairs waiting to be tested for the disease. Surrounding them are confirmed Ebola patients, walking around the packed dirt square getting exercise. One man collapses on the ground, unable to walk and appearing near death. Leaning against the wall is a woman who just died.

Those admitted to the unit who don’t have Ebola will surely catch it. Those already diagnosed with the disease are just waiting to see if their bodies will fight it off. I met a young woman who had been in the ward for nine days. When I asked when she would be going home, she smiled, did a little dance and said, “Today!” She is one of the lucky ones.

This Ebola outbreak is like no other. It’s urban rather than rural, and therefore faster moving. It’s occurring places where there is profound distrust of the government and where basic healthcare infrastructure was among the poorest in the world before the outbreak hit. In Liberia, there were roughly 50 doctors for a country of more than 4 million people. Some of those doctors have now died from Ebola and many clinics have closed.

I’m traveling at the same time as Dr. Tom Frieden, director of the U.S. Centers for Disease Control and Prevention, Dr. Tom Kenyon, director of Global Health for the agency, and a couple other CDC staff. The group is on a fact-finding tour of the region. They will visit Liberia, Sierra Leone and Guinea – the three countries hardest hit by the outbreak – hoping to bring attention to the global health crisis and rally support from the international community.

While Ebola is the disease making headlines in the region, the outbreak’s impact on other health problems is believed to be staggering. The number of women who give birth without a trained attendant, the number of children with malaria who go untreated, and the number of people who die from trauma because there is no hospital willing or able to take them is unknown.

At JFK medical Center, the largest hospital in Liberia, it’s a tale of contrasts. The emergency department – usually a frenzy of activity – is shut down. Ambulances are parked in the lot, going nowhere. There are not enough doctors and other health care workers to staff the emergency room, and it’s too dangerous to let patients walk in off the street. Someone with fever might have malaria, but they also might have Ebola.

The makeshift Ebola ward is down a little alley from the hospital in a concrete building that used to house the hospital’s cholera treatment center. It was converted nine days ago and has already reached capacity with nearly 60 patients, some sleeping on mats on the floor. Six of the patients have been health care workers. 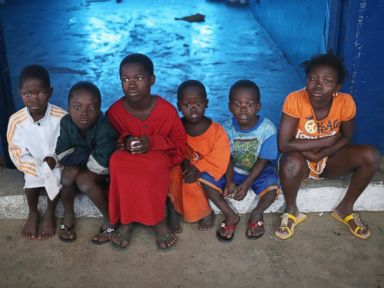 Dr. David Kaggwa, a Ugandan pediatrician working as an expert consultant to the World Health Organization, took us into the treatment center. As I suited up to enter, I knew that any mistake could be costly. Each layer was important: boots, scrub suit, plastic apron, outer gown, mask, goggles and two pairs of gloves. An expert in protective gear made sure we were properly covered. Every time we entered or left a room, we’d step in a pan full of bleach and wash our hands with bleach – basic precautions performed with military precision to avoid spreading Ebola.

Inside the center, there were two parallel paths separated by a two-foot high red mesh screen: one leading to the isolation ward, the other to the triage tent. The triage tent was about 100 square feet separated down the middle by a low wall. On our side, three nurses and physician assistants sat at a table, getting information from patients. No physical contact with the patients was allowed. If a patient collapsed, they would have to wait until someone in proper gear was available to help.

While we were there, over a course of 20 minutes, three patients were evaluated. All of them had contact with someone with Ebola and all now had symptoms consistent with the disease. They were admitted as suspect cases and would be tested.

Behind the triage tent was the isolation ward, where patients were waiting to die or survive. The scene was apocalyptic. I asked the security guard if he was scared. “No,” he replied. If an Ebola patient comes near him and tries to touch him, he runs. He showed me where he once knocked down the fence running to escape.

Dr. Kaggwa believes that with more resources, more beds and more protective gear, more patients with Ebola will be cured and fewer health care workers will get sick. For now, the outbreak toll continues to tick up, with no end in sight.