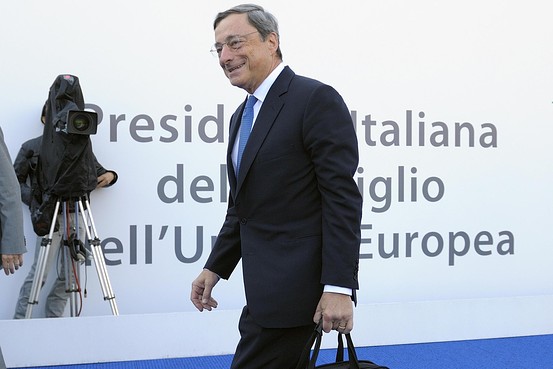 ECB President Mario Draghi will be presiding over eurozone monetary-policy meetings with a streamlined voting system as soon as Lithuania joins the single-currency area.
Zuma Press

FRANKFURT – Central bankers from Spain, Estonia, Ireland and Greece will give up their voting rights at the January meeting of the European Central Bank, under a new rotation system the ECB unveiled Thursday.

The new rules go into effect once Lithuania becomes the 19th member to join the currency bloc, which is due to happen at the start of the New Year.

The rotation system splits the eurozone’s national central bank governors into groups of larger and smaller countries. At each meeting, one member of the group of the five largest countries—Germany, France, Italy, Spain and The Netherlands–won’t vote, while three members from the remaining group of 14 governors will sit out.

After Spain, France will be the next large country to rotate off.

The six members of the Executive Board, which is based in Frankfurt, have a permanent vote.

The ECB said it decided the voting lineup by means of a draw.

The voting rotation system has come under criticism in Germany, where some politicians and observers object to Bundesbank President Jens Weidmann occasionally losing a vote. Germany is Europe’s largest economy. According to the ECB’s rotation calendar, Mr. Weidmann won’t vote at the May and October meetings next year.

The ECB has said repeatedly, and stated again in its press release Thursday, that all central bank governors “will continue to participate in the Governing Council meetings and discussions”, even if they formally don’t have a vote.

Next year will be a year of many changes at the ECB. In addition to Lithuania joining the euro zone and triggering the new rotation scheme, the ECB will also hold its policy meetings now only about once every six weeks instead of monthly, though it will still meet every month to discuss issues unrelated to monetary policy. The ECB will also start publishing accounts, or minutes, of its meetings.

In advance of these changes, the ECB will also become the eurozone’s banking supervisor in less than two months, and ECB employees are due to start moving into a new headquarters in Frankfurt by the end of the year.