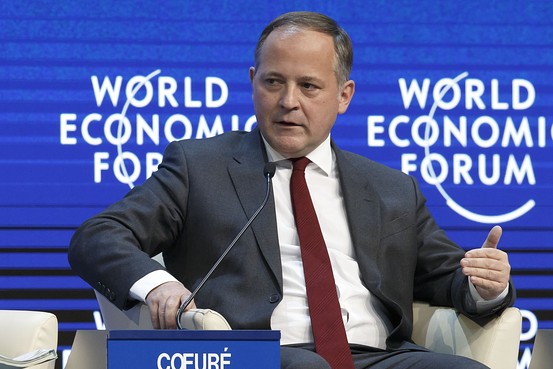 European Central Bank board member Benoît Cœuré speaks at a panel at the World Economic Forum in Davos, Switzerland, on Jan. 24. On Tuesday, Mr. Cœuré said the ECB will be able to find enough bonds to buy as part of its bond-buying program.
Associated Press

FRANKFURT—European Central Bank Executive Board member Benoît Cœuré said that the ECB will be able to find enough bonds to buy as part of its public-sector bond-purchase program, even though there could be a scarcity of eligible securities.

“While the effective supply of eligible securities is undoubtedly lower than the total amount outstanding, I do believe that it will still be substantially higher than the amounts we intend to purchase,” said Mr. Cœuré in remarks prepared for delivery in Frankfurt.

“If this is the case, there will be a price at which we can buy the quantities needed to meet our monthly targets,” he said. “In other words, we may face a scarcity of bonds, but we won’t face a shortage.”

He added that he didn’t think this was necessarily a problem. “Allocating scarce resources through prices is the way our economies work.”

The comments come one day after the ECB launched its long-awaited public-sector purchase program that it announced in January. Mr. Cœuré said, on the first day, the ECB and the central banks of the countries that use the euro purchased €3.2 billion in bonds. This put the program “on track” to meet its monthly goal of €60 billion in public- and private-sector debt, Mr. Cœuré said.

Mr. Cœuré downplayed concerns that the ECB wouldn’t be able to meet its target on government-bond purchases. “Let me state firmly that at this point there are no signs of issues in respect of sourcing the bonds,” he said.

He said that it was “in the best interest of banks to reduce their exposure to their respective government, which should increase their willingness to sell.”

The comments came on the same day that a financial-markets watchdog group headed by European Central Bank President Mario Draghi said the risk-free treatment of government bonds in some regulations may lead to excessive investment in these types of securities.