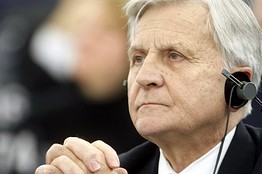 Ireland’s central bank governor revealed on Wednesday that he had opposed a Nov. 2010 decision by the European Central Bank to send a letter to the Irish government threatening to withdraw support for the country’s stricken banks unless the government sought financial help from the European Union and the International Monetary Fund.

The ECB finally released the exchange of correspondence between then President Jean Claude Trichet and then Minister of Finance Brian Lenihan earlier this month.

As head of the Irish central bank, Patrick Honohan was a member of the ECB’s governing council in 2010, as he is now. Answering a question from a lawmaker during testimony on the state of Ireland’s banking system, he said that he had not supported the decision to send the letters.

“The idea of a letter was discussed by the governing council,” he said. “I didn’t think it was such a good idea. I didn’t see a draft of the letter.”

He added that he had supported the recent decision to publish the letters.

At the time of the exchange of letters, the Irish government had spent large sums propping up banks that faced heavy losses in the wake of a property market crash. Yields on Irish government bonds were surging as investors speculated on how much it would ultimately cost the government to repair the banking system, making it difficult for the government to finance itself on affordable terms.

The Central Bank of Ireland had also supported the stricken lenders through a program known as Emergency Liquidity Assistance, or ELA, the use of which required the approval of the ECB’s governing council.

In a letter dated Nov. 19, 2010 and marked “secret,” Mr. Trichet made it clear to Mr. Lenihan that the governing council couldn’t authorize further loans to the Irish banks unless the government sought an international bailout.

“It is the position of the governing council that it is only if we receive in writing a commitment from the Irish government…on the four following points that we can authorize further provisions of ELA,” Mr. Trichet wrote.

He then listed the first point as: “The Irish government shall send a request for financial support to the Eurogroup [the group of eurozone finance ministers].”

Without the emergency loans from the Central Bank of Ireland, Ireland’s banks would likely have collapsed, since they had almost no access to other sources of day-to-day funding.

On Nov. 21, Mr. Lenihan replied to Mr. Trichet, informing him that “the Irish government has decided today to seek access to external support from the European and international support mechanisms.”