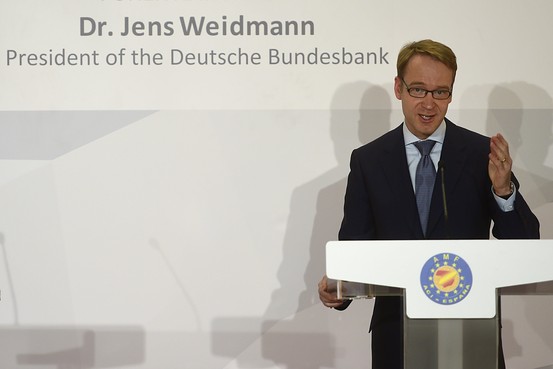 Speaking in Madrid, Mr. Weidmann—who is a member of the European Central Bank’s 24-strong governing council—said that monetary policy alone can’t create growth, and must be based on higher productivity and policy reforms.

“Central banks are not able to deliver growth,” Mr. Weidmann said. “Whenever we meet, this is always the first question, there is the conception that there is this silver bullet and this is distracting our attention from the main problem.”

Mr. Weidmann’s comments follow remarks made Friday by ECB President Mario Draghi, who sent a strong signal that the bank is ready to “step up the pressure” and expand its stimulus programs. This may happen, Mr. Draghi explained, if eurozone inflation fails to show signs of quickly returning to the bank’s target of just below 2%.

Also Friday, China’s central bank unexpectedly reduced its benchmark lending rate for the first time in more than two years, by 0.4 percentage point to 5.6%, amid signs that its economy—the third-largest after the U.S. and the eurozone—is slowing.

In recent months, Mr. Weidmann has often spoken out against the purchase of government bonds by the ECB. Other members of the governing council have expressed a similar stance.