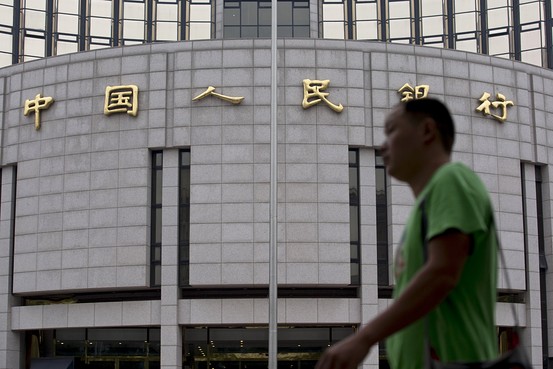 A commuter walks past the People’s Bank Of China (PBOC) headquarters in Beijing.
Bloomberg News

As China considers a change of guard at its central bank, Chinese leaders face a larger question: Are they willing to tolerate slower economic growth? As the WSJ’s Lingling Wei reports:

Top-level discussions about the possible departure of Zhou Xiaochuan, the long-serving governor of the People’s Bank of China and a strong advocate for market-oriented reforms, come as the likelihood is rising that the world’s No. 2 economy may fall short of the government’s annual economic growth target, 7.5% for 2014, for the first time since the Asian financial crisis of 1998.

Many economists say Beijing may have to resort to more big-bang measures—such as a blanket interest-rate cut that, according to central bank advisers, has been fended off by Mr. Zhou—to rev up economic activity.

Those moves, however, would mean Beijing returning to its old handbook of putting a priority on stoking growth. The emphasis on growth might exacerbate already high levels of debt and delay reforms leaders say they want to put the economy on a more sustainable path.

China’s economy has been wobbling in recent months, dragged down by a sluggish property market, which accounts for a quarter of the country’s gross domestic product, and by a widening corruption crackdown that has cast a chill over spending and investment.

To counter the effects of the global financial crisis, China in 2008 launched a massive stimulus plan, which helped lift the Chinese economy but also saddled it with debt. Back then, Mr. Zhou warned then-Premier Wen Jiabao that the stimulus was going on too long but his advice was ignored, according to Chinese officials with knowledge of the matter. The result was that the PBOC was late in trying to contain the resulting inflation, and China’s debt problems also worsened.

China’s Communist Party chief Xi Jinping is considering replacing Mr. Zhou as part of a wider personnel shuffle that also comes after internal battles over economic overhauls, The Wall Street Journal reported Wednesday. A final decision has yet to be reached, party officials told the Journal. 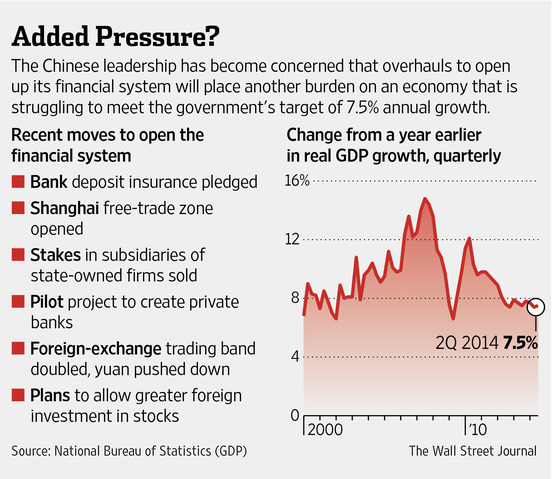 Read the full story on WSJ.com