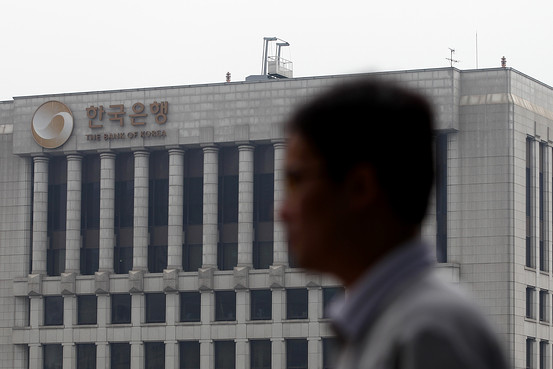 A man walks past the Bank of Korea headquarters in Seoul.
Bloomberg News

As expectations build that the Bank of Korea will lower its policy rate in August for the first time in over a year, economists are speculating about other steps the central bank may take to boost growth.

The BOK has actually already promised to expand its lending by 3 trillion won ($2.9 billion) to commercial banks for loans for small firms as part of the government’s $40 billion stimulus package announced last week.

But market watchers note there are other options the BOK may go for to try and encourage spending.

Nomura economist Kwon Young-sun expects the BOK to reduce commercial banks’ reserve requirement ratio—the amount of cash they are required to keep at the central bank as a buffer—by two percentage points to 5% at its policy board meeting on Aug. 14.

That might help encourage banks to lend more, putting cash to work in the economy. The BOK last moved the reserve ratio from 5% to the current level of 7% in December 2006.

ANZ economists forecast on Wednesday the BOK will cut its base rate and also play an “active role in the mortgage-loan or household-debt market.”

Boosting the housing market is one of the goals of the government’s plan. Finance Minister Choi Kyung-hwan promised to expand state funds to finance low-income workers to buy homes and also ease rules on mortgages available to home buyers.

After appearing to pressure the BOK for action to support growth earlier this month, Mr. Choi has backed away from comments about monetary policy and stressed the independence of the central bank.

The BOK declined to comment on a possible rate cut or other easing steps.

An earlier version of this post incorrectly stated that the BOK last moved the reserve ratio from 7% in December 2006. It moved the ratio to 7% from 5% at that time.