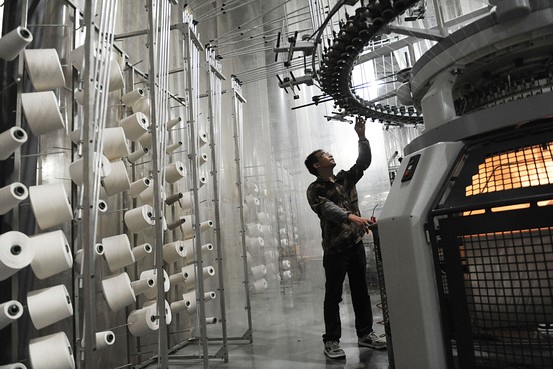 A worker attends to equipment in a clothing factory in Bozhou, Anhui province.
Agence France-Presse/Getty Images

The year began with a chorus of negative predictions for China’s economy, as the housing market stumbled and one economic data point after another came in below forecasts. After a helping hand from the government, in the form of looser monetary policy and stepped up infrastructure spending, things now seem better than feared.

Two closely watched gauges of manufacturing activity published Tuesday showed a pick-up in June. The official PMI rose to a six-month high of 51.0, compared with 50.8 in May, while HSBC’s competing index jumped to 50.7 from 49.4. It is the first time this year that the HSBC PMI has topped 50, which represents the dividing like between expansion and contraction.

Today’s official PMI suggests that, despite further weakness in the property sector, conditions in manufacturing are holding up reasonably well… Overall, today’s PMI reading suggests that broader economic conditions are stable for now. But with developers’ inventories of unsold property still growing, real estate looks set to remain a drag on the economy, meaning that further targeted support measures may be needed to shore up growth. – Julian Evans-Pritchard, Capital Economics

The rise of both PMIs suggests that growth momentum has been picking up due to the recent pro-growth policies, including increasing infrastructure investment and accelerating budgeted fiscal spending. The rising G3 (U.S., Europe and Japan) demand and intra-Asia trade flows have provided positive impetus as well…Combining these factors, we believe that China’s GDP growth in the second quarter will likely come in above 7.5%, compared with 7.4% in the first.  – Li-Gang Liu and Hao Zhou, ANZ Bank

China’s manufacturing PMI hit a six-month high, showing improved economic conditions given a series of fine-tuning measures and recent targeted easing monetary policies. Better external demand also contributed to the increase in the PMI reading. Looking ahead, we believe the central bank will stay with targeted easing to continuously support small and medium-sized enterprises and rural-related industries, and in the meanwhile the government will enlarge fiscal expenditures to ensure economic growth meets its target. – Fan Zhang, CIMB

We expect Beijing to continue rolling out a slew of small-scale measures to deliver the around-7.5% annual growth target… But we believe Beijing will resist calls for universal measures such as cutting benchmark rates and cutting the reserve ratio requirement for all banks.  – Ting Lu and Xiaojia Zhi, Bank of America Merrill Lynch