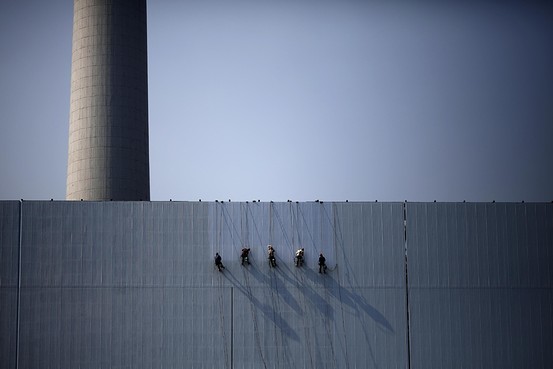 Workers paint an exterior wall of a power plant in Beijing on July 15, 2014.
Reuters

China’s economic growth in the second quarter came in slightly stronger than economists had expected. The pickup in growth suggests that the world’s second-largest economy may have stabilized after a slowdown earlier this year, thanks to the government’s efforts to channel more credit and step up spending to boost the economy.

In the second quarter, the gross domestic product rose 7.5% from a year earlier, picking up slightly from 7.4% growth in the first quarter, China’s National Bureau of Statistics said Wednesday. The increase was greater than a median 7.4% growth forecast by 21 economists in a Wall Street Journal survey.

Industrial output in June and fixed-asset investment in the first half of the year both beat expectations, but home sales in China in the year’s first half fell, in a sign of the economy’s continued headwinds.

Economists weigh in on whether the recovery is strong enough to last through the year’s second half and on what policy tools they’re likely to deploy (edited for style):

Overall, there are no big surprises, it’s slightly better than the market consensus. The details are not very surprising…The key message is significant recovery in the second quarter. The good news is, the economy seems to be bottoming out. Yesterday’s credit numbers may be more of a one-off, a temporary easing, driven by some seasonal factors….I think the government will stick to what it’s been doing, the stimulus won’t stop. Debt and real estate problems will remain, but the near-term risk is still low.—Zhu Haibin, J.P. Morgan

In the second half of the year, the government is likely to continue its “targeted easing” measures to sustain the growth in the world’s second-largest economy. Selective cuts in the reserve requirement ratio for banks and the central bank’s relending facilities will likely be adopted to pump liquidity into the economy. The growth rate in the year’s second half will likely fall between 7.5% and 7.6%. For now, the supporting measures for the housing market will be limited to removal of housing purchase restrictions. If the situations further deteriorates, Beijing may take more measures to boost demand in the property market.  –Zhang Fan, CIMB

China’s economic growth has indeed stabilized in the second quarter, but the recovery remains fragile. Looking ahead, I think growth in the third quarter may be a bit lower than the second quarter, as the real estate market still has some problems. Property investment has stabilized at low levels in June, but property investment growth will likely slow further in the second half of the year, to about 10% or 11%. Property still poses the biggest downside risk to China’s economy. – Larry Hu, Macquarie Group

It’s largely in line with our expectations. Recent data has been trending up and the rebound seen over the summer will continue. But if you look at the numbers, there’s not enough strength. We expect growth to weaken again in the fourth quarter. This is a summer rebound. We’ll see a drag on growth given weakness in the property sector toward the year’s end. The government is likely to increase its targeted stimulus measures. Growth will go down in the fourth quarter and stay weak next year. — Donna Kwok, UBS