Economists React: China Set for a Summer Slump After All – Real Time Economics 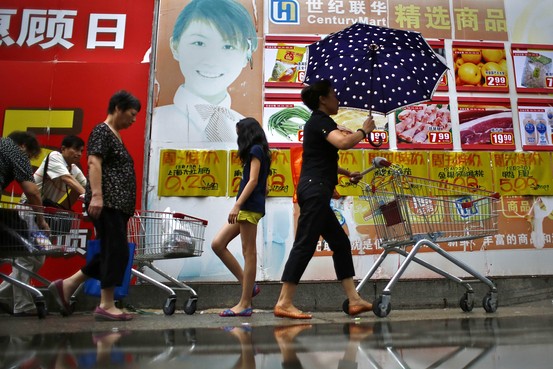 A couple of months ago, there were signs that China’s economy was back on track – exports were doing well, growth hit the government’s 7.5% target in the second quarter, and it seemed that a slump in the real-estate sector would be contained. Alas, it was too good to last. July’s figures showed weakness in industrial production, investment and retail sales, a strange, sudden drop in lending, and a continued plunge in home prices. The first piece of data from August, the preliminary or “flash” purchasing managers’ index released by HSBC, dropped from 51.7 to 50.3 – barely above the 50-line that separates expansion from contraction.

The setback in the PMI data came after the weak financing and economic data last month, showing that the overall economic situation has not improved in August. Production continued to slow down after a short period of upbeat growth…It will fuel further expectation for government policy easing such as reserve-requirement ratio cuts or even an interest-rate cut. China’s first-half economic growth was only 7.4%, slightly short of the full-year target of 7.5%. It is challenging to accomplish the target if the economic situation continues to worsen like the past two months. – North Square Blue Oak

Today’s PMI reading suggests that conditions in the manufacturing sector have cooled on the back of moderating policy support…The sharp drop in the PMI is perhaps not surprising given last month’s disappointing activity and lending data. After rushing to shore up growth in the second quarter, it seems that policymakers are now taking a more hands-off approach, with support from infrastructure spending beginning to level off. – Julian Evans-Pritchard, Capital Economics

In previous months, China’s economy was supported by improved external demand and a series of mini-stimulus packages. Thus, scale of government’s proactive fiscal policy is one of the key issues to determine the pace of current economic recovery. As July’s economic data came in weaker than the market expected, we believe more efforts will be done by the government to help the economy to stabilize. Targeted easing and direct financial supports from policy banks are likely to continue in coming months. – Fan Zhang, CIMB

Improvements over the last four months in China’s manufacturing sector appear fragile…Weaker sentiments align with moderating output growth, tepid new financing and a plummeting housing market still searching for a bottom in July data. Most importantly, strong government spending in May and June weakened in July, consistent with “mini” stimulus labels, although this raises doubts as to the sustainability of the recovery without persistent government support. – Brian Jackson, IHS