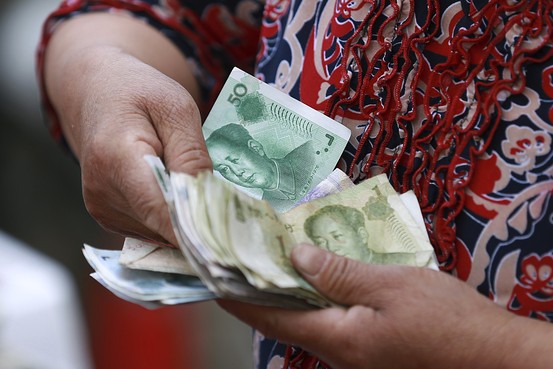 A vegetable vendor holds a stack of Chinese yuan at a morning market in Shenyang, Liaoning province.
Reuters

Inflation in China remained in check in June as China’s consumer price index rose 2.3% from a year earlier, compared with a 2.5% increase in May, the National Bureau of Statistics said Wednesday. Pork, egg and vegetable prices eased, while non-food prices held steady.

China’s producer price index, a measure of costs at the factory gate, fell for the 28th straight month, declining 1.1% year on year in June compared with a 1.4% fall in May, amid ongoing concerns of deflation. Most analysts said the monthly results give Chinese policy makers more leeway to boost economic growth using targeted fiscal and monetary stimulus measures, since there’s little immediate cause for worry about inflation. Targeted stimulus measures could include further cuts in the reserve requirement ratio, the amount of funds that banks keep in reserve with the central bank, which would help expand credit. China has set an inflation target of 3.5% for the year.

It’s worth noting that the consumer inflation dropped month on month and PPI has been in negative territory for 28 straight months. Looking ahead, China faces deflation pressure, not inflation pressure. That should give room for the central bank to adopt an accommodative monetary policy. I think there should be a cut in RRR for a least 60% of the banks in China in the early part of the third quarter. I think the central bank is ‘lost’ with its monetary policy now. The People’s Bank of China is focusing on restructuring the economy, but in effect, monetary policy’s primary goal should be to adjust economic cycles. At a time when both companies and local governments are highly leveraged and the monetary policy is not accommodative enough, we could see more companies default on their loans and rising bad loan ratios of banks. That’ll be really bad. — Liu Ligang, ANZ

Low inflation is good news for Chinese consumption growth, since it preserves the purchasing value of consumers’ disposable income. While inflation in China is well controlled in 2014, it has much less salience for macro policy than in years past. Inflation is no longer the binding constraint on credit growth in China; instead, financial stability risk is. China’s policymakers are far from alone in being more concerned by excessive indebtedness than by inflation; monetary authorities in the Eurozone and Sweden are likewise struggling with the balance between competing goals of price stability and financial stability. This is not to say that China’s macro policy is tight in 2014. On the contrary: China’s June credit data, which we expect to show loan growth considerably outpacing nominal GDP growth, will show that its government continues to prioritize growth over financial stability. — Bill Adams, PNC Financial Services Group

The full-year CPI is likely to come in around 2%, far below the target of 3.5%. This is good news for policy makers, as inflation is not a concern and they can still continue with their targeted support. For the second half, we think the food inflation cycle, which is a main driver for CPI, is unlikely to see a substantial pickup. The risk is low for a shortage in pork or vegetables, which have driven up prices in the past. — Haibin Zhu, J.P. Morgan

I think we’ve seen the low in PPI deflation. We’re seeing a kind of sluggish turn. I reckon it will stabilize at a fairly low level. There may be mild deflation or mild inflation, but mild is the operative word. It would take a crazy shock to see a big boost in consumer inflation. Non-food inflation has accelerated since the global financial crisis. Non-food inflation used to be around 1.2% before the GFC, recently it’s around 1.6%. There’s hardly anything to worry about. If we don’t get some agricultural price shock, it’s very difficult to get non-food inflation moving up significantly. – Tim Condon, ING