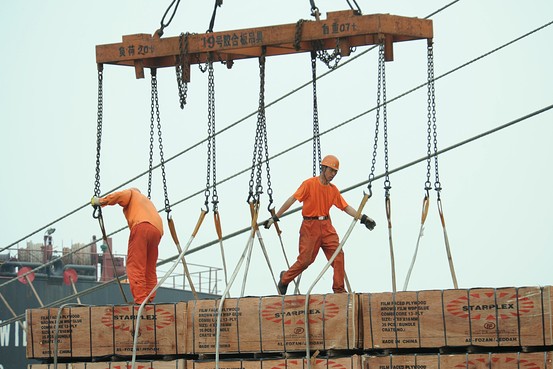 China’s manufacturing sector hasn’t had an easy time recently, battered by worries about a slowing economy at home and declining competitiveness on international markets. But the latest purchasing managers’ indexes — surveys of businesses around the country — point to a rebound. China’s two PMIs both rose to 51.7 in July – the first time since December 2008 they have yielded the same number. That marks an 18-month high for HSBC’s index and a 27-month high for the official equivalent. Analysts credit the improvement to a combination of government spending on infrastructure and resurgent demand for China’s exports.

The recovery reflects further feed-through from the authorities’ recent pro-growth measures as well as improvement in global economic conditions. In particular, on the domestic front, the significant expansion in fiscal spending and credit growth in May and June, as well as the recent accelerated pace of relaxation of property restrictions by local governments, appear to have boosted near-term sentiment in the economy. – Haibin Zhu, J.P. Morgan

The latest PMI surveys confirm that the recovery in manufacturing activity has continued to accelerate going into the third quarter. That said, policymakers are seemingly comfortable with current growth rates and are rolling out fewer new stimulus measures, which limits the scope for a further pick-up in growth… The convergence between the official and unofficial PMI suggests that small firms, which are more heavily weighted in the latter index, are no longer underperforming their larger counterparts by quite as much. – Julian Evans-Pritchard, Capital Economics

Exogenous supports, such as targeted monetary loosening and rising government expenditure, mainly supported the recovery in manufacturing sector. To ensure steady economic growth, we believe the government will stay with targeted easing and proactive fiscal policy in coming months. Meanwhile, the government is likely to speed up the pace of reforms from the second half of 2014, as a measure for sustainable economic growth in the long run. – Fan Zhang, CIMB

We expect more easing measures as President Xi (Jinping) reiterated the importance of the economy growing at a certain pace. We maintain our view that lowering financing costs remains a top policy priority for the People’s Bank of China in the second half. We think its focus is to guide down medium-term interest rates through various new policy tools or targeted interest-rate cuts. In our view, a low interest-rate environment would be more conducive for China’s deleveraging. – Jian Chang and Serena Zhou, Barclays

With growth gaining momentum, the pace of reform is likely to pick up in the second half. We expect monetary policy to maintain an easing bias… The employment index fell by 0.3 points to 48.3 and has remained below 50 for 26 months. Discussions with companies suggest this may reflect a shortage of labor and increased automation rather than lack of jobs. – Shuang Ding, Minggao Shen and Serena Wang, Citigroup