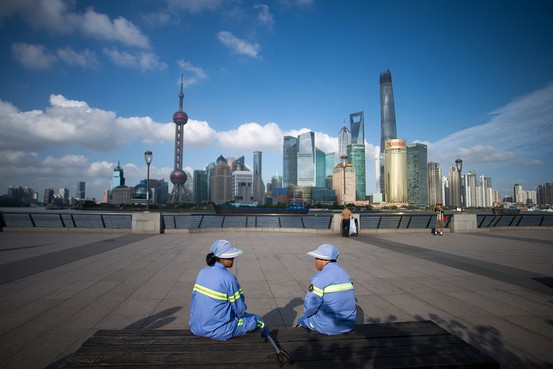 Two cleaners rest on a bench at the Bund in Shanghai on July 23, 2014.
Agence France-Presse/Getty Images

It has been a rocky year for China’s economy so far, with a pronounced slowdown early in the year that raised the prospect that the long-feared “hard landing” might finally have arrived. The government lost no time in responding, though, with a round of infrastructure spending and monetary easing that seems to have succeeded in perking up the economy – at least to judge from the HSBC “flash” manufacturing purchasing managers’ index, a survey of businesses, which hit an 18-month high of 52.0 in July. A rebound in export demand hasn’t hurt, either.

Today’s PMI reading suggests that conditions in the manufacturing sector have continued to improve going into the third quarter on the back of targeted support measures and warming external demand. That said, subdued activity in the property sector is likely to remain a drag on growth this year…Concerns about growing credit risks should prevent policymakers from a launching broad stimulus that could lead to a significant rebound in credit growth. – Julian Evans-Pritchard, Capital Economics

The flash release of the July PMI shows China’s export sector is acting as an underappreciated tailwind to growth in 2014. While China’s economy is less dependent on exports in 2014 than it was in 2008, its performance is still closely tied to the global business cycle. With 2014 shaping up to be a good year for the U.S. and British labor markets, and an OK one for Germany’s, it was only a matter of time before stronger demand in China’s advanced economy export markets passed through to stronger manufacturing output in China. – Bill Adams, PNC Financial Services

HSBC’s PMI reading came in higher than expected, mainly due to targeted easing for small and medium-sized enterprises and supportive policies kicked off since early in the second quarter. It is likely orders from the government’s fine-tuning measures have already been passed to smaller sized enterprises from large state-owned firms… But we are still cautious on the pace of recovery, as commodity prices and electricity consumption growth were still weak, which suggests the demand recovery is still fragile. – Fan Zhang, CIMB

The breakdown of the flash PMI points to a good growth momentum in the coming months. Both new orders and new export orders are above 50 and are rising and quantity of purchases increased, while stocks of finished goods decreased. So we can say that there is some destocking at the moment. Note that the PMI also reflects sentiment. Due perhaps to the escalation of supportive policies from Beijing, sentiment in the economy and financial markets have been noticeably improved. – Ting Lu, Bank of America Merrill Lynch

The significant expansion in fiscal spending and credit growth in May and June, as well as the recent accelerated pace of relaxation of property restrictions by local governments, appear to have boosted near-term sentiments in the economy.  Looking into the second half of the year…our global team expects a solid pickup in the advanced economies’ growth, which will provide support for China’s export sector in the coming months. – Haibin Zhu, J.P. Morgan