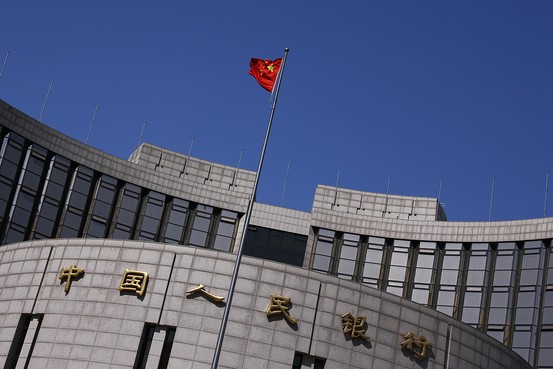 A Chinese national flag flutters outside the headquarters of the People’s Bank of China in Beijing.
REUTERS

China’s central bank on Monday night filled in details of a previously announced plan to let some banks lend out more of their deposits, aiming to give a boost to select sectors of the economy.

The People’s Bank of China said it was making a “targeted cut” in the reserve requirement ratio — the portion of deposits banks need to keep on reserve — trimming the rate by 0.5 percentage point for banks that lend to the rural sector and smaller companies. The move followed a cut in April for county-level rural commercial banks and rural cooperatives, as China’s economic growth slows from its breakneck pace of previous years.

Economists’ estimates of the size varied — the central bank’s statement was short on details — but the cut could release about 100 billion yuan ($16.1 billion) into the system. That’s only a small portion of the 111.7 trillion yuan in total banking deposits.

Economists weighed in on how much the targeted reserve cut will impact the economy, and what the central bank should do next. The entries have been edited slightly for style:

–It’s a timely move and shows that the central bank realizes how serious the economic slowdown is. But it’s not enough to reduce companies’ financing costs…It won’t help cut interest rates, as the only effective way to reduce financing costs is a broad reserve requirement ratio cut, because the shadow banking sector has been shrinking and the on-balance-sheet credits are not enough to meet the needs of first-time homebuyers and smaller companies. I think the central bank will announce a cut in the RRR ratio for bigger banks soon. –Shen Jianguang, Mizuho

–The last time the cut was for some rural banks. This time it’s the rest of the rural banks and some city banks. My calculation is that it’s about 10% of a broad cut… around 50 billion yuan. It’s not so significant. It’s consistent with their message of the last few weeks. They’ll introduce measures as the economy continues to slow. Policy makers are still cautious about real estate and other debt-ridden sectors, they’re still trying to target their policy. A broad RRR cut ahead? In the near term, it’s still unlikely. — Wang Qinwei, Capital Economics

–This impact will be greater than the last rural RRR cut, but it’s still targeted. It’s still a fine-tuning measure by the PBOC, which will continue to do such targeted measures. I think it could be around 150-200 billion yuan. It’s mostly smaller banks. I don’t think this will lead to a broad RRR cut. — Fan ZHANG, CIMB Securities

–It’s definitely a positive signal to support the economy, which still faces downward pressure, and it will inject about 100 billion yuan into the economy. The targeted cut in the RRR is consistent with the central bank’s objective this year to avoid a big stimulus package like the one used after the global financial crisis. It’s unlikely that there will be an overall cut in the RRR in the near term, as it will take the central bank two to three months to see how the “targeted loosening” works. The released liquidity will go to the property market to help solve the capital shortage among some developers, and it will also help stabilize the cooling housing market. –Ma Xiaoping, HSBC