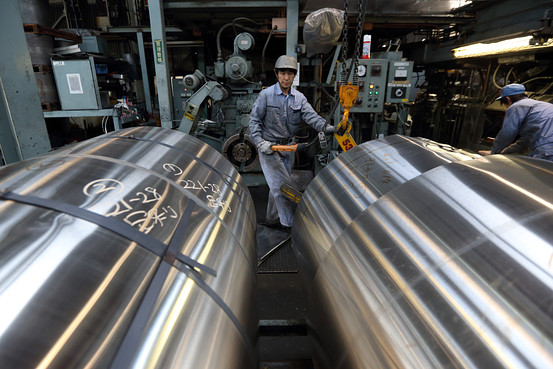 An employee operates a crane to move a roll of sheet aluminum on the production line at the Akao Aluminum Co. plant in Tokyo.
Bloomberg News

With the start of the third quarter, hopes were high that the economy would stage a quick recovery from a 6.8% annualized plunge in the April-June period that came after Japan raised its sales tax.

But a raft of data released Friday raise uncomfortable questions for Prime Minister Shinzo Abe about the state of the economy.

Weak figures for retail sales and household spending in July show consumers remain tentative in their outlays without higher wage hikes. Unemployment was higher for a second consecutive months.

After recording the biggest drop in over three years in June, Japan’s industrial production was supposed to snap back. Snap back it did, but by a meager 0.2% on month against market-expected 1.2%.

Core inflation at 1.3% in July, was within the Bank of Japan ’s target. But there’s not much to cheer here. The following are economists’ reactions to the data, edited for style:

Today’s data on industrial production and retail sales show that the economy continued to stagnate at the start of the third quarter. What’s more inflation moderated in July and is set to decline further, which should increase pressure on policy makers to do more. The upshot is that the BOJ still has more work to do.

A rebound in industrial production turned out extremely weak. With inventories still growing, businesses will have no choice but to rein in production going forward. Japan now faces the real risk of a back-to-back decline in output in July-September.

The post-tax-hike correction in production has exceeded the expectations of the government and the BOJ by a considerable margin. In view of our outlook for a slump in real wages and a resultant delayed recovery in domestic demand, we had been looking to external demand to drive economic growth in FY2014. While the pickup in the US economy is welcome news, prospects of a production recovery in Japan appear to be diminishing as a result of a decline in corporate Japan’s structural export capacity.

Amid a significant decline in real wages since the tax hike in April, data releases have indicated that consumers are lowering their spending levels, being unable to meet bullish corporate pricing. In response to this, we think companies are starting to become bearish in their pricing.”

The data released overnight again disappointed and suggest that the recovery in the wake of the consumption tax hike in April will be weaker than expected, albeit Japan will return to positive GDP growth in the third quarter after contracting 6.8% annualized in the second quarter. Clear downside risk to our forecast of 3.0% growth in the current quarter.

Weak retail sales are likely to be temporary, due mainly to bad weather in July and August.
If these temporary factors are stripped out, the economy generally maintains a positive trend.