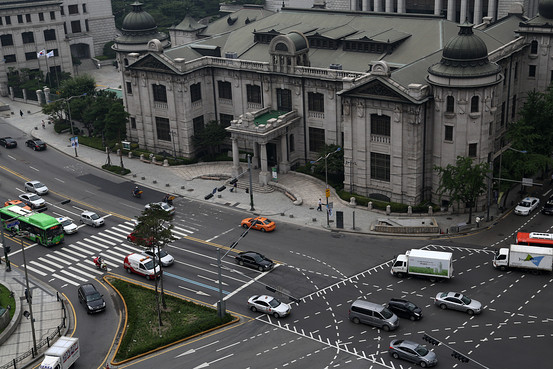 Gov. Lee defended the cut, the first in 15 months, by saying that higher growth and incomes will make debt burdens more manageable. But some economists still worry about possible defaults on household debt that has more than doubled over the past decade.

The move comes after the government recently outlined a $40 billion stimulus plan that also was seen as putting growth above debt concerns.

Here are some comments by economists on the rate cut:

“This suggests that the government’s policy stance has shifted towards debt-driven strong near-term growth. If domestic demand continues to weaken despite today’s rate cut, government stimulus measures and improved exports, we believe the BOK is likely to cut rates further, with low inflation providing it with room to ease further.”

“The chief risk to the outlook is the mountain of household debt accumulated over the last decade. Household debt exceeded 1 quadrillion won (about $1 trillion) for the first time in 2014, equal to more than 70% of nominal GDP. Policymakers must encourage households to deleverage but without hitting consumption too hard. This balancing act will become more difficult as pressure builds for rates to rise in coming years.”

“With GDP still growing at 0.6% quarter-on-quarter in Q2, the economic condition hardly justifies a rate cut. Yet…accommodating the government’s growth boosting strategy has become the primary consideration of the BOK. The rate cut today is politically driven…Governor Lee remains vigilant to the side effect of rate cut, which will likely increase household debts.”

“Policy coordination between the central bank and the government will help raise domestic sentiment in the Korean economy, following the recent decline in the Bank of Korea’s consumer confidence and manufacturing sentiment readings. But the boost to hard economic data, such as GDP, will likely be limited. This is because the problems on the domestic demand front are structural in nature. For example, the country’s high household debt incurs large interest payments. Therefore, we believe there is a greater need for officials to boost household income growth over the medium term.”