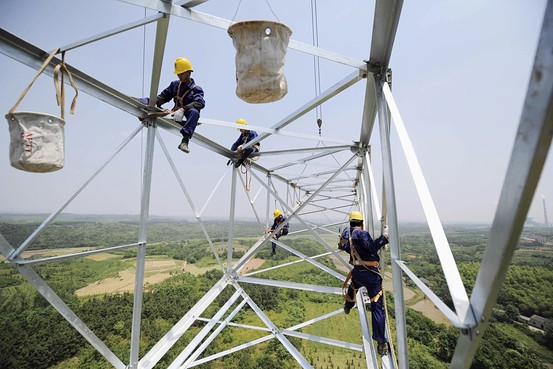 Growth in China’s industrial output picked up slightly in May.
Reuters

Growth in China’s industrial output picked up slightly in May, thanks to recent government support measures, economists say, but housing sales showed further weakness, part of a mixed economic picture for the world’s second-largest economy.

Value-added industrial output in May rose 8.8% from a year earlier, accelerating slightly from an 8.7% year-over-year increase in April, while fixed-asset investment in non-rural areas climbed 17.2% in the January-May period, a tad down from a 17.3% rise in the January-April period. Both figures are largely in line with economists’ expectations.

Economists weigh in on whether the government’s easing measures are enough to offset a downturn in the property market (edited for style).

–China’s generally positive investment, retail and factory output data in May show that government mini-stimulus measures are having an impact, but probably not enough so far to counteract the recent property market downturn. The only fly in the ointment is the real estate market. If the property slowdown persists for the whole year, real estate could be a drag of 0.5 to 0.75 of a percentage point on GDP growth. Beijing would have to do more to offset that impact with further stimulus measures, including a broad-based reserve-requirement ratio cut later this year if the property market slips further. – Dariusz Kowalczyk, Crédit Agricole

–The broader picture is that the property sector is still putting downwards pressure on the economy, but this appears to have been largely offset by infrastructure spending and other targeted measures, which have shored up other areas of the economy. Looking ahead, we expect policymakers to stick with this targeted approach, at least for the time being. On Wednesday, the State Council announced plans for additional infrastructure projects. If the property sector remains a drag on the rest of the economy, as we suspect it might, more concerted efforts, including a broad cut to the required reserve ratio, may be needed to support growth. But our best guess is that this shift will not happen before the fourth quarter. – Julian Evans-Pritchard, Capital Economics

–The economy has stabilized and it looks like growth will meet the government’s target of about 7.5% for the year. GDP growth in the second and third quarter will likely be around 7.4%, but the fourth quarter could be a bit higher as fiscal support measures show more obvious results. The property market, however, will likely remain sluggish for the rest of the year, and property could decelerate further. People’s expectations (of further price cuts) are definitely affecting the market. – Lu Zhengwei, Industrial Bank

–Fixed-asset investment and industrial production growth were in line with market expectations in May, given government’s supportive measures, but the retail sales number was higher than the consensus due to a high CPI reading for the month. Looking ahead, moderation in property investment will remain as the major threat to the country’s recovery, while we expect more local governments will soften their restrictions on the property sector. Policy-wise, we believe the government will stay with targeted easing and proactive fiscal stimulus.  – Zhang Fan, CIMB Securities