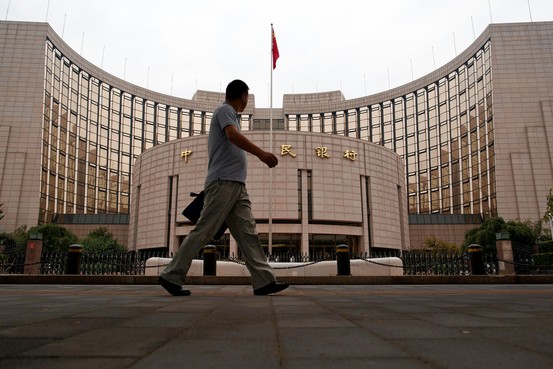 A commuter walks past the People’s Bank Of China.
Bloomberg

China’s decision makers yet again resisted pressure to significantly ease monetary policy and instead injected 500 billion yuan ($81 billion) in liquidity into the country’s five major state-owned banks as part of its push to counter a worse-than-expected slowdown in the world’s No. 2 economy.

The move was equivalent to a roughly 0.5-percentage-point cut in the amount of reserves China’s commercial banks set aside with the central bank. But many economists question whether such targeted measures are the right policy.

Several economists weigh in on the impacts of the injection and what to expect from Beijing next (edited slightly for style and clarity):

Previously, the government reacted with policy easing before the Li Keqiang Index dropped to this level. This year Chinese policy-makers seem more reluctant to adopt broad-based easing as they try to avoid stimulating the economy, but it appears to have only delayed the action…we believe broad-based policy rate cuts would be more transparent and effective than the implicit reserve-requirement ratio cut in order to bring down the cost of capital. We continue to expect three policy-rate cuts from now into the first half of 2015. –Minggao Shen, Shuang Ding, Citigroup

The move will unlikely boost market sentiment as it will not effectively improve demand for loans. We’re not supportive of this continuous use of targeted easing. They need something bigger to turn market sentiment around. It’s not fair for [policy makers] to blame high debt levels simply on previous cuts of reserve-requirement ratio and interest rates. There are other problems, like the state monopoly of the banking sector, lack of interest-rate liberalization and the unreasonable timings of previous moves. –Li Wei, Standard Chartered

It also shows that policy makers are resisting the pressure to cut rates or RRR universally by opting for such conditional easing. While both [Standing Lending Facility] and RRR cuts should be seen as monetary easing, the former is a more contained measure with liquidity provided for three months each time (can be rolled over afterwards) that keeps the rein in the central bank’s hand. In comparison, SLF also has a much more muted signaling impact, which is seen as less harmful against the administration’s pro-reform image. Going forward, we think it is still going to be “more targeted easing, for now.” The hope for a rate cut is slim unless growth deceleration continues. –Helen Qiao, Sun Junwei, Zhang Yin, Morgan Stanley

While we believe that the timing for injection is right, the tool is less than ideal. The PBOC has increasingly been relying on the less transparent and more discretionary policy tools for liquidity management. As a general tool, we believe the SLF should not replace the role of traditional monetary policy tools such as changing the RRR and open market operations. The SLF is biased toward certain market participants, and is thus a step back in China’s financial market reforms. The SLF process creates base money and is akin to printing money. Thus, in our view, not the proper use of a tool the PBOC’s says is a “last-resort” mechanism. –Shen Jianguang, Michael Luk, Mizuho