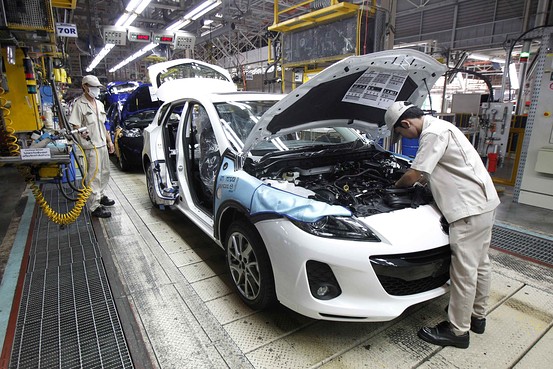 Thailand’s economy avoided a recession in the second quarter, growing 0.4% on year and 0.9% on quarter. The performance, which beat expectations, was due to firmer local demand.

Consumer spending perked up after a military coup on May 22 ended months of political protests. The junta have also begun to spend, further aiding growth.

Some economists say the economy will do better in the second half. But there are worries. Investment remained weak in the quarter. And high household debt means that consumption is unlikely to grow that strongly for the remainder of the year.

Here’s what economists had to say:

J.P. Morgan : “Domestic demand stages a comeback… Domestic demand accelerated 10.8% quarter-on-quarter on a seasonally-adjusted basis in 2Q, the strongest sequential print since mid-2012, supporting the overall expansion in growth through the quarter. In over-year-ago terms, domestic demand subtracted 4.9% points from headline GDP, though a drawdown in inventories was partly responsible.”

Barclays : “Net exports continued to make a positive contribution to growth, though this factor remains driven by import compression for the time being, with imports falling a further 1.0% quarter-on-quarter on seasonally adjusted basis… Overall, domestic demand looks poised to recover further in the second half. We expect private consumption and investment demand to improve in coming months.”

ANZ: “Thailand averted a technical recession in Q2 … GDP (growth) confirms the stabilization in economic activity that monthly private consumption and investment indicators have suggested as the political outlook turns constructive… We expect the unlocking of fiscal spending to manifest itself in a V-shaped recovery for Thailand in H2 2014.”

Capital Economics: “The economy continues to face several headwinds that will prevent it from making a quick return to trend growth. While the improvement in consumer sentiment is encouraging, high household debt burdens will continue to constrain private consumption growth. More generally, private credit growth has been rapid in recent years and will need to slow to avoid a nasty correction down the road.”