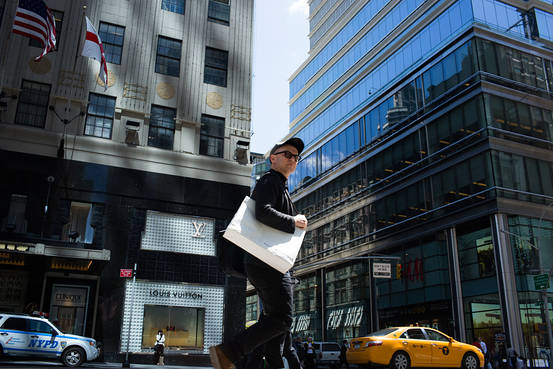 Shoppers walk along Lexington Avenue in the eastern Midtown section of Manhattan in April. “It is the consumer that is in the driver’s seat always, and they continue to spend at an even faster rate of 2.9%,” says Chris Rupkey of MUFG Union Bank.
KEVIN HAGEN/GETTY IMAGES

U.S. gross domestic product,  the broadest sum of goods and services produced across the economy, grew by a seasonally adjusted annual rate of 2.3 percent in the second quarter of 2015, the Commerce Department said on Thursday. Here’s what economists had to say:

“The mixing and matching of what drives GDP growth has shifted to consumption and housing, what the Fed was indicating yesterday. Overall growth is certainly strong enough and steady enough, despite the lack of any upside dynamics, to suggest the real cost of short-term money should be more than zero. The [Federal Open Market Committee] increasingly agrees from our read and, after all, they only want to raise the funds rate to 25 basis points from 12.5 basis points and then think about it the next move.” –Steven Blitz, ITG

“Second-quarter growth was powered by strong vehicle demand. But households bought nondurable goods and spent a fair amount on services. In contrast, business investment declined. Much of that came from a drop in equipment spending, which is probably the oil-patch retrenchment….The federal government continues to do whatever it can to kill the economy but at least state and local governments are spending again. There was a new measure created that reflects private domestic demand as it excludes trade, inventories and government spending. It rose solidly. This will be watched closely as it relates to what is happening in the domestic economy.” –Joel Naroff, Naroff Economic Advisors

“Spending on intellectual property products grew at an annual rate of 5.5% in the second quarter, continuing a nice string of advances which offers some hope for improved productivity growth in future quarters.…The bottom line is slow productivity growth remains an issue which must be dealt with but first has to be more fully understood than it now is. All in all, today’s report doesn’t alter the broader view of the U.S. economy, with growth still in the steady though by no means satisfying range that has persisted since the end of the 2007-09 recession.” –Richard Moody, Regions Financial Corp.

“As expected, much of the second quarter rebound in growth reflected a fading of the drag from net exports–they added 0.1 points to the growth rate in the second quarter after subtracting 1.9 points in the first quarter. Also, consumption accelerated to a 2.9% pace from 1.7% and government to +0.8% from -0.1%. Business fixed investment slowed to -0.6% from +1.6% and residential investment to +6.6% from +10.1%. In short, growth was much better in the second quarter than the first quarter, but still fairly moderate. Core inflation was up a bit on the quarter, but the trend has probably not changed yet. The pace for growth remains extremely weak by past recovery standards, but with potential growth weaker as well it appears to be more than sufficient to keep the unemployment rate coming down.” -–Jim O’Sullivan, High Frequency Economics

“Business investment contracted 0.6% [quarter over quarter], reflecting a 4.1% drop in equipment investment and a 1.6% [quarter over quarter] fall in structures investment…Today’s GDP report, including its revisions, will give the Federal Open Market Committee more confidence that the soft-patch in the first quarter was less significant than previously thought. The story on the economy remains consistent: strong consumption, weak investment. We are looking for this trend to continue in the second half of the year where we anticipate growth accelerating above 3.0%.” –U.S. Economics Team, BNP Paribas

“The economy is back this morning, better than ever, having fully shaken off those cold winter weather blues at the start of the year….Don’t like 2.3%, not good enough? Well, think again, it is the consumer that is in the driver’s seat always, and they continue to spend at an even faster rate of 2.9%. In short, there is nothing in today’s report that keeps the Fed from raising rates the first time in September. Nothing at all. The economy is stronger than you think. Bet on it.” –Chris Rupkey, MUFG Union Bank

“The most concerning factor in the morning’s report was not necessarily the modest headline increase, but the lack of widespread support for growth in the second quarter. Personal spending accounted for two percent of the 2.3% headline increase. Spending, however, needs to be supported by other areas of activity in the economy, particularly business development and job creation. At this point, however, business development and expansion remains markedly weak. Going forward, without widespread improvement in business activity, there is very little to suggest stability, let alone momentum in the economy, as we look further into the second half of the year.” –Lindsey Piegza, Stifel Economics

“The personal saving rate was 4.8 percent for the quarter, the same as the average of 2014. This should end speculation about why people are not spending their dividend from lower gas prices, since the data indicate they are. Consumption is at near-record highs as a share of GDP, which makes the frequent fretting over cautious consumers seem more than a bit peculiar. The data on health-care spending continue to look very good. Spending on health-care services, which accounts for the vast majority of health-care spending, rose at a 2.7 percent annual rate in the quarter, virtually the same as the rate over the last three years. Spending on drugs has been rising considerably more rapidly. Inflation continues to be very much under control. Over the last year, the core personal-consumption expenditure (PCE) has risen by 1.3 percent, well below the Fed’s 2.0 percent target.” –Dean Baker, Center for Economic and Policy Research

“Inventories expanded at a $110 billion annual pace, essentially unchanged from the first-quarter reading of $112.8 billion. That is a lot of inventories over two quarters, and we are ripe for a slowdown in inventory accumulation in the second half of the year, which would be a drag on the headline GDP figures. Aside from a sizable increase in auto inventories, which is an understandable reaction to the improvement in demand in recent months, the bulk of the jump in inventories in the past two quarters came at the wholesale level. What does this represent? In my view, it reflects the bulge in imports seen in the first half of the year that followed the strengthening of the dollar.” –Stephen Stanley, Amherst Pierpont Securities

“Final sales to private domestic purchasers, which is one of our favorite measures of underlying demand, increased 2.5% in the second quarter compared to 2.0% in the prior quarter. However, this is below the 3.2% annual average for 2014, and inventories were much larger than expected ($110 billion vs. $113 billion and a trailing three-year average of around $60 billion). However, we are not changing our estimate of 3.0% current-quarter real GDP in part because the residual seasonality that has been seen in a weak first quarter has tended to result in a stronger third quarter. Moreover, we expect robust consumer spending this quarter.” –Joseph LaVorgna, Deutsche Bank

“Residential investment won the award for best performance improvement, rising 6.6% in [the second quarter]. More importantly, growth in the two preceding quarters was revised up to an average of 10% (from 5.2% prior to the revisions). This indicates that, while modest, the housing recovery is gathering momentum and will support real GDP growth in the coming quarters. Indeed the sector has added 0.3 percentage points to GDP over the last three quarters. On the business investment front, we see the drag from sluggish global growth and a stronger dollar continuing into the second half of the year while the fallback in crude oil prices will translate into a lingering drag on oil and gas structures investment. Nonetheless, business investment should receive support from resilient domestic activity. On the housing front, we expect a gradual and steady recovery boosted by firmer income growth and still-low interest rates.” –-Gregory Daco, Oxford Economics

The Worst Expansion Since World War II Was Even Weaker